Do you challenge yourself every day? Challenges make you stronger. They introduce you to new experiences. New experiences make you learn new things. Ultimately, you collect memories that you can cherish and use them to get wiser. 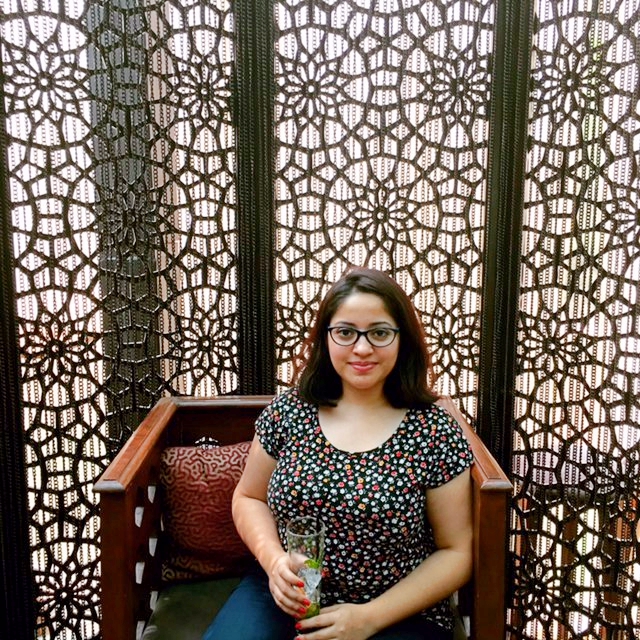 This time, I found myself sitting on a comfy sofa in a dimly lit place with the company of some friends. I could see the bright light coming from a corner and was told that there’s an open seating area which is much more happening than my current seating place. Due to the excessive heat, I couldn’t sit in the bright sunlight with the brilliant decor. Though that open like seating area is air conditioned, it doesn’t work if the temperature soars up even above 40 degrees.

But this couldn’t bring down my spirits as I loved this dimly lit area and found it as comfy as I desire when I go to eat out. Moreover, I could still click the beautiful pictures in the open area. It’s a big place where you could enjoy your food in solace or with a friend’s company without feeling like you’re sitting in a crowded place. The crowd was lesser in the afternoon as this place is mainly for evening events – belly dancing, Sufi nights and more.

The place? Zerzura, located in Qutub Hotel. Reaching through metro is easy. Get down at Hauz Khas situation, take an auto and reach there in 10 minutes. I nearly died while travelling in the auto-rickshaw as a Delhi Transport bus driver thought as if the entire road is free for his use and other vehicles are just his imagination. But I reached and started my food journey at this place.

Why did I decide to go to Zerzura? It were hosting a Jordan food festival for the month of June 2016 and had a special menu for people who wanted to taste authentic Jordan cuisine.

I started with the drinks. I ordered two drinks – Orange Mojito and cold coffee.

Orange Mojito is a regular drink which we can find in any other restaurant as well. But I needed a refreshing drink, so ordered for it. The flavours were very strong, and I couldn’t reach the last sip of this drink as, by the time you finish half of it, there’s this strong flavour of mint that troubles you. It did to me. Cold coffee was a regular coffee with mild coffee taste and lots of milk in it. 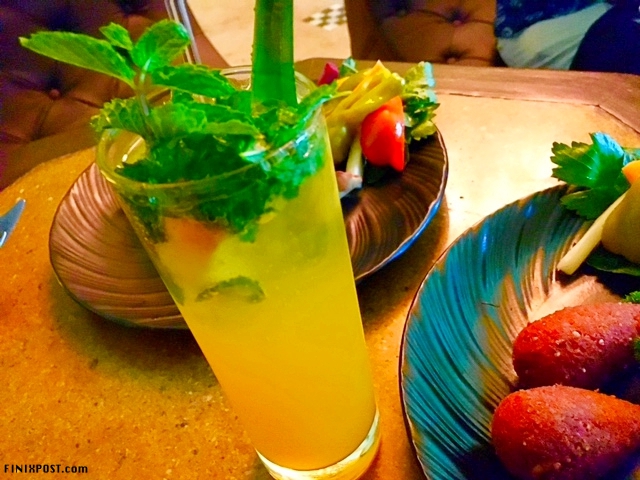 I liked the orange mojito but only the first half of it. Coffee was like coffee I make at home. I had expected great or different flavours. Let’s not judge this place for these silly kids’ drinks. 😉

The area is famous for the classy cocktails and alcoholic beverages. Unfortunately, I didn’t try any at this place so can’t tell you more about it. 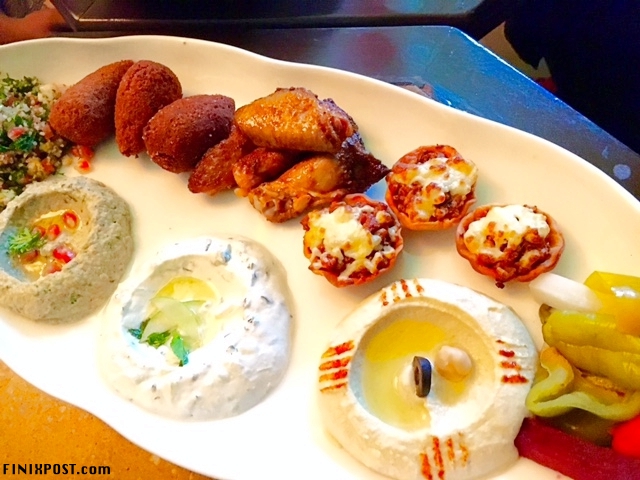 The dish comes with chicken wings (in the middle), kibbeh mishwee (on the left) and lamb tarts (on the right). It was accompanied with hummus (a chick-peas based dip and much-overhyped dip in the middle eastern cuisine), baba ghanoush (an eggplant based dip) and Cacik (a yogurt-based dip). Tabouleh and mukhalail are two more dishes that accompany this platter. The entire dish is served with pita bread.

Allow me to elaborate more about these dishes. As a traditional Indian; you would find these quite queer. You can skip this paragraph if you’re just interested to know how these tasted like. Hummus is a dip which is majorly a part of Egyptian, Middle Eastern, and Moroccan cuisine. Essential ingredients in hummus are chickpeas, tahini (a condiment made from sesame seeds), olive oil, salt, lemon juice and garlic. Baba Ghanoush is a Middle Eastern dish that made from eggplant, olive oil, onions, tomatoes and other seasonings from the related cuisine. Baba Ghanoush is often served with Pita bread. Pita bread is a baked bread made of wheat flour. Cacik is herbed yogurt. It consists of yogurt along with cucumber, salt, olive oil, garlic, and lemon juice/vinegar. Chicken wings are regular chicken wings which all of us know of. Kibbeh mishwee is a Middle Eastern/Lebanese snack which consists of minced lamb (beef in original preparation), cracked wheat, onions and other Middle Eastern spices. Lamb tarts were filled with small chunks of lamb. Tabuleh is a Middle Eastern vegetarian dish that’s a mix of parsley, bulgur, and tomato. It is usually served cold.

Phew! That was a pretty long explanation. Let’s talk about the taste now. Chicken wings – well, they felt like you would just gulp them and not even think of the taste. The moment I picked it up, it was on a trip through my oesophagus (path to my stomach). Kibbeh – I found them really dry and tasteless. I tried them twice just to make sure if there was something else to taste but sadly there wasn’t. Tarts – I would go to this place over and over again for the tarts. The dips – I just couldn’t fancy gulping up the dips. Maybe it was the presentation or just my mood at that moment, but I didn’t feel like trying any of the dips. I was happy eating my food without any dips. It’s obvious I didn’t try the other two vegetarian dishes that came with the entire platter. 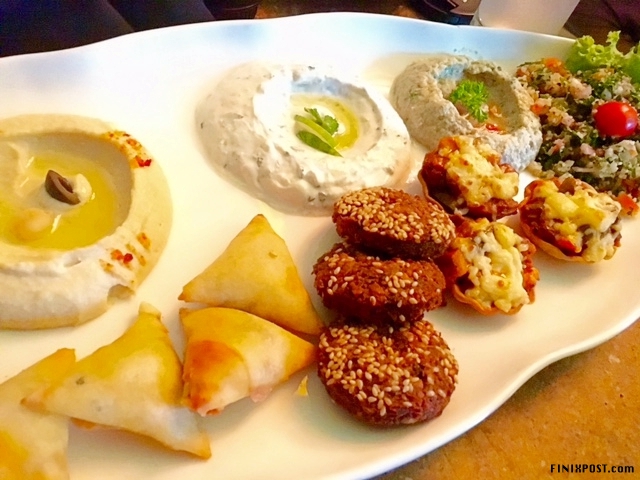 The veg dish had the same dips and side dishes as the nonveg platter. Just the three most famous dishes from the nonveg platter were swapped with the vegetarian counterparts. The veg kibbeh was replaced by falafel which tasted almost same as kibbeh… dry! The cheese shamboshik was yummy. It just melted in my mouth, and that’s the kind of food I like. Moreover, as an Indian, who loves samosas, I can eat any variant of a samosa with pleasure. The zucchini tarts were tasty. I liked the thick layer of cheese, and it somehow was set to the right temperature. Neither it was melting nor was it thick and chewy. It was just right. 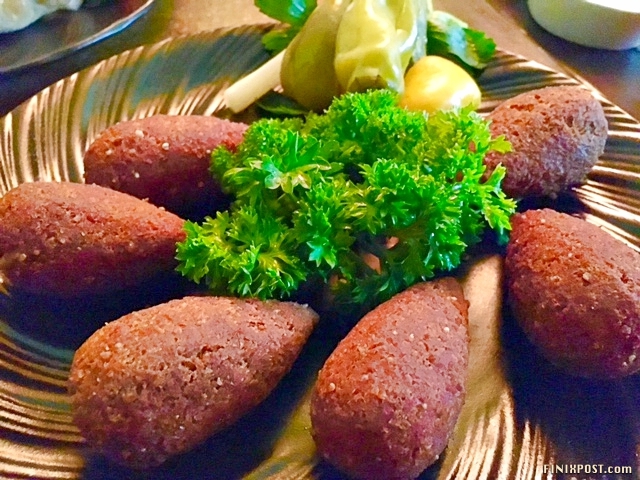 It turns out we ordered Kibbeh before the platter and hence we had another serving of this dish. As I said before, I found the dish too dry. The yogurt dip served with these was pretty simple and nothing that would delight my taste buds. 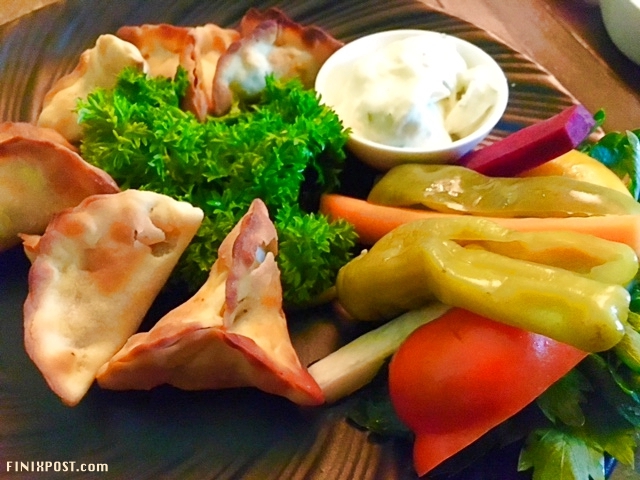 Fatayar has basically stuffed dough pies and is available in two variants – with spinach or with meat. I feel gross just at the name of spinach, which looks scary when it’s ground in a paste sort of thing. So, I restrained myself from trying the spinach variants and went with the meat one.

The coating was simple with just the dough and a little bit of salt (I guess the presence of salt). There was nothing else in the layer. It was plain simple and good. The filling had mild spices and tasted pretty good as well. 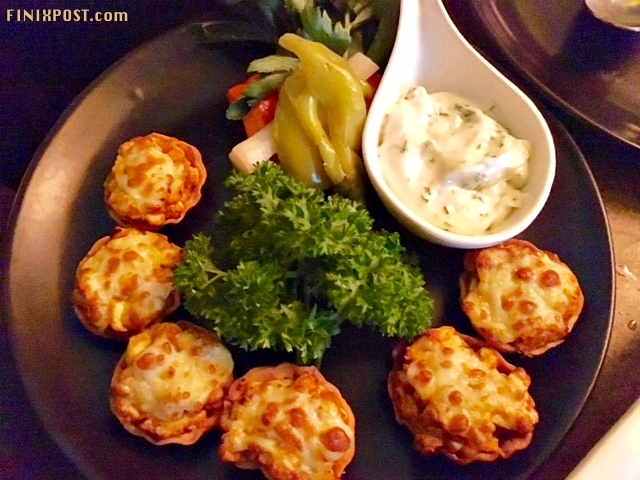 Again this dish has two variants – lamb and cheese. I tried both, and if you ever go to this place, you must try this recipe. It’s yummy and out of all the dishes I tried at this place, I liked this best. The bowl-shaped tarts were slightly crunchy and delicious. The filling was just mouth-watering. 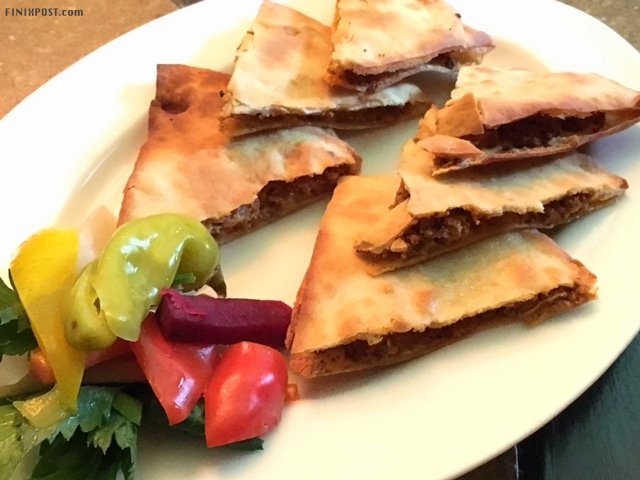 This was a special pizza from Jordan food festival menu. It had the mixture of crushed lamb. Filling? Yep! It didn’t look like a pizza and nor did it taste like one. It was a different and good taste but nothing like the pizza. I found the layers of dough quite thick and didn’t enjoy the taste that much. The lamb filling was good. 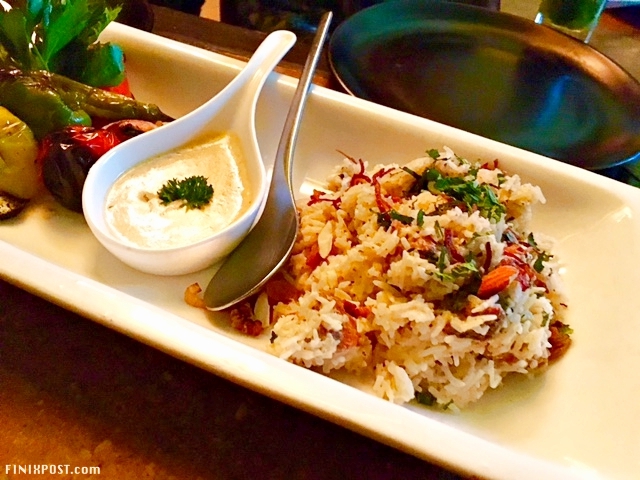 This is again a dish from the food festival menu and is the national dish of Jordan.  It’s a rice-based dish that comes with lamb cooked with yogurt and is served with a layer of rice. The overall taste of this dish was very mild, and it had a strong flavour of yogurt (obviously). I couldn’t enjoy it much as I don’t like such strong taste of yogurt. 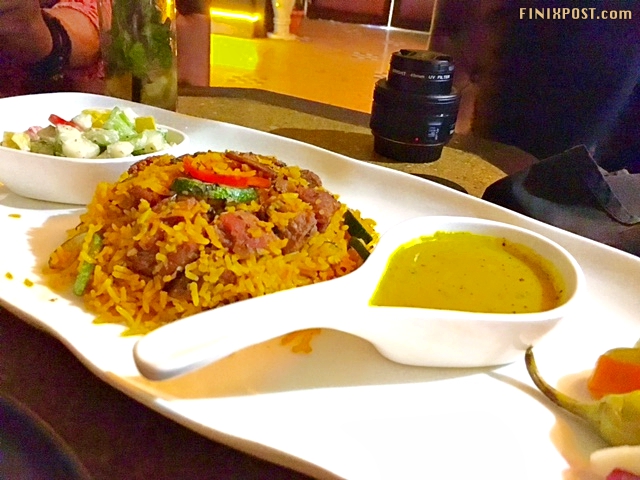 This is the rice-based dish that tended to my desi appetite. It consists of rice, meat and vegetables cooked in layers and then served upside down. The dish tasted very much like Biryani and was yummy. It had strong flavours and was spicy. Everything I needed to fill my tummy. It’s a pastry-like dessert which consists of thick layers of a particular kind of dough named filo and filled with chopped nuts. The sweetness comes through syrup or honey. The dish was too sweet for my taste and wasn’t one I would remember for days. It was okay. 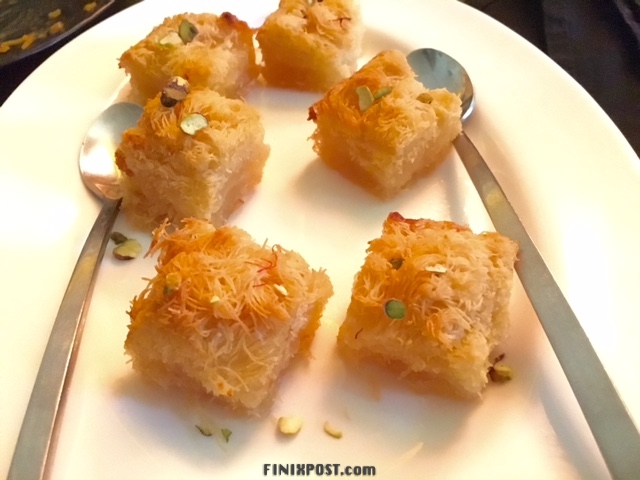 This is the traditional dessert from the Jordan food festival menu. It’s prepared with vermicelli and lots of cheese. The dish had a strange taste which I tended to enjoy. I couldn’t satisfy myself with one serving.

Overall, this was a real food adventure. I knew the cuisine is somewhat different, and I was up for it. It was my first time with Middle Eastern cuisine, and I enjoyed a lot of dishes. I am looking forward to trying this cuisine again.

I liked the food preparation at Zerzura. Almost everything was well presented. The staff knew a lot about the dishes (at least the person who served us did) and we got our orders very quick. There were just two dishes which I couldn’t like at all, but there were also some dishes I liked a lot. The place is much more happening during the night time, so I would suggest you to visit then. Considering the cost factor, it is a bit costly than usual restaurants in Delhi. But if high cost is something that doesn’t bother you, definitely try out this place.