Me: How about reading Rearview My Roadies Journey by Raghu? 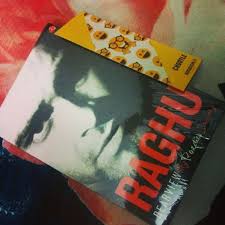 Neither am I.  In fact, the only thing I remember about roadies – the MTV show is how I used to pretend that I liked watching it just to impress my cousins. Of course, Roadies was the coolest show ever in the last few years but I never found it so cool. But then, why were I reading the book?

One – I wanted to start reading autobiographies because such books are filled with tones of inspiring moments and important life lessons. Second – a friend of mine literally bugged me to read this book. Hence I ended up including Rearview My Roadies Journey in my winter 2014 reading list and this was the second book I read after How I braved Anu Aunty & Co-founded a million dollar company.

What’s in the book?

This book is the autobiography of that tall, bald, rude man who manages to induce terror even in the most aggressive and brave contestant on his show. No one knew much about this man until he got so popular with the show he produced for MTV- Roadies. And even after being so popular, he didn’t receive much appreciation. In fact, he was hated by most of the people. But this guy did have something – something so witching that even though everyone hated him, they missed him. Even though everyone wanted him to leave roadies, they still found it incomplete without this guy named Raghu Ram.

The book begins with a crazy scene where Raghu experiences a crazy crowd while briefly explaining what kind of things he faced being a part of Roadies, being that tough, tall and rude guy who is hated by all.

Then in the second chapter, the book actually begins where two twins are born named – Raghu Ram and Rajiv Lakshman. It is amazing that the book caught my attention from the beginning because of the narration style. All I could say till the end of the book was it couldn’t have been written by an amateur writer, but then while reading the book, I realized that he is not just any amateur writer. He is THE man behind Roadies.

With a gripping narration style, Raghu informs how his childhood life had been. Those moments when he was bullied and beaten up were truly sobering and I am sure they would shake the souls of bullies. At least, they would get an idea about what goes in the mind of those innocent souls that get bullied.

But at the same time, Raghu’s efforts of getting up are inspiring.  It wasn’t some unnatural heroic scenario. It seemed real. You could feel a soul struggling to get up and fight through the words of this book.

Raghu and Rajiv did enjoy being in limelight for being the ‘twins’ but at the same time, they faced what every student in India fears – fear of being a mediocre or even below average student. They were not good at studies. And in India, that becomes a big issue. Doesn’t it?

And gradually, the story turns to the Roadies life of Raghu. How he actually came across this television thing? And the way he started is… how many times am I going to say ‘inspiring’? Seldom people get a chance to begin their career from something big. Rest (like Raghu Ram) just work as some small artists who are paid extremely low sum of money for the work they do until they achieve stardom.

Raghu explains how he and his brother started working for a T.V. channel network and gradually learned work and progressed in their life. It is a huge lesson that must be learned by people. You just don’t get the talent served in a platter. You have to look for it, learn it, and polish it. That’s what he did. From video editing to writing scripts, from planning to shoot a show to actually being a part of it – all didn’t come to Raghu at once and this is what he tells you in the book. How he actually became the Roadies Raghu?

Though a large part of book talks about the show only, but each talk has some lesson that the reader needs to find out and take it in. The beginning of the book seems like an autobiography of both the twins but after that, Raghu is all on his own where he gets to meet new people and experience new things like work ethics, love, friendship etc.

Even if you talk about Roadies, I haven’t been much of a follower of the show but you get to know a lot about how a show is planned. And this whole story of coming up with roadies is a great lesson for people who get scared of incomplete ideas or plans. Just start working on them… they would be perfect one day; like roadies is (The fans say it is perfect).

I believe a person’s life has a number of sides and Raghu addresses each one of them. From handling hatred to bearing setbacks in life, from happiness of finding love to the fear of losing someone you love a lot, from being hated to being loved and again from being loved to being hated – you see it all, through the eyes of the real Raghu.

I learned new things, I got inspired and I am motivated. This is the affect Rearview My Roadies Journey has on you. I definitely recommend it.

And Did I tell that the last part of the book is really fun and amusing as well. The book has a perfect combination of emotions. Try it!