Since the Nirbhaya incident, all I notice when I open up the newspaper is the rape cases reported in a day or proceedings related to some “popular” rape cases. No doubt, rapes have been happening in the country since ages but it caught attention of people in a couple of years because of the extent of inhumane activities happening around us. 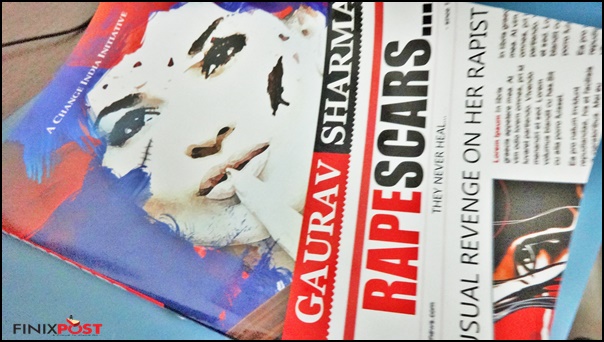 While Indian government is still handicapped when it comes to preventing rapes without literally snatching away every right of a woman, there have been people who have tried to make a difference in their own unique way. It is great to see that such people exist.

Rapescars… is the second book written by Gaurav Sharma. Yes, he is the author who wrote a great book Love @ Air Force. It is time to find out how’s the new book.

Akriti, a young college girl, is raped and undergoes all the atrocities a woman in India undergoes after becoming the victim of such a heinous crime. She faces the “unaffected” eyes of police, a doctor who is too accustomed to deal with rape victims, a defence lawyer who would leave no stone unturned to give her a title of a ‘whore’ and the key player in the whole scenario – Society.

After undergoing the aftermath that comes after reporting a rape case, she wins the court case. But she refuses to accept imprisonment as a punishment for what was done to her. She chooses something else!

The story is about Akriti, how she underwent the tormenting incident and how she fights with it.

What kind of book Rapescars… is?

Let’s begin with the cover. Of course, I don’t judge the book by its cover but that doesn’t give me an excuse to ignore what’s on the cover. The only thing I noticed on the cover is how careless the book publishing team has been. No doubt, we are more interested in reading what’s inside the book. But that’s not an excuse for committing a blunder like this. The newspaper report which fills up a large part of the bottom of the cover is flawed. Can you read the text below the headline? The publishing team couldn’t even bring out enough time to at least convert the language of the text in news article to English.

It is time to talk about the story. The first part of the book isn’t impressive. Although it completely shattered my will of reading this book, I went on and reached to the part where the woman was raped. Call me inhuman but yep! That part wasn’t written well. I can’t just stir the emotions in me just at the name of the ‘rape’. Remember how your soul shrieks when you hear about a rape incident? Maybe my expectations were too high, but I literally wanted to have that kind of emotion while reading this part of the book. It wasn’t there. It was just plain words telling that the girl was raped. Pathetic.

There were places when the author contradicted his own statements. In one chapter, Akriti observes that the time goes too slow when something bad happens to you. In the very next chapter, Akriti says “The only quality, time possesses is, it passes away with an invariable speed.”  Such kinds of things certainly leave a bad impression on the reader. They did on me.

In the first part of the book, I felt disgusted at the wrong choice of words by the author. At a place, he called that the police ‘mistreated’ the rape victim. When you read the whole segment, you would definitely crave for some other word describing the incident. Tell me, if you don’t! Such misses were there in several parts in the first half of the book.

I must say that at some places the author did choose some awesome words. Some lines in the book are written exceptionally well. Unfortunately, those were the only places where I felt that I was reading a Gaurav Sharma book (read – a good book).

The whole book has been written trying to bring out the fact that women are in fact strong and then in the end, the author carelessly chooses the word ‘weak’ to describe women. If you are a true man, you won’t exercise your masculine power over weak women, like a desecrator.

In half of the book, I felt like I was in a sermon where I was hearing statements on purity, strength of women, rapes, rapist’s mindset and so on… That nod which comes when you are in tune with the story never came to me. I felt like I was being lectured every time a statement like that occurred. And that happened often.

It was a simple story going on in a simple way. No new thought… Even the phrases, which discussed about the scene and incident, were something I had already heard. A lot many times.

I seriously hated the first half of the book. There was nothing that could hold me to the book except the fact that I was bound to read it as a part of my commitment to my readers and the Book Reviewing team. I had to push myself too hard to keep reading it.

The part after the court case did grab my interest. Although what happened in the story is something I would never agree upon, but as a reader, I prefer to review books with an open mind. Anything can happen.

I know the book is a “bold” attempt by the author to bring out the serious issue our society is facing. But that wins it no points from my side. I picked up the book because of the ‘attempt’. I can’t call it awesome just because it talks of ‘rapes’.

A Word about Back Cover

I seriously get astonished by the kind of attention that is paid to back cover. Come on! Most of the people pick up a book by reading what’s in the back cover. I am sure if my readers read what’s written on the back cover as an introduction to the book in the About the Book Rapescars… part, they would have left reading the review right then.

This is a sincere advice to any author or budding author who would read this review. Back cover is important. It must be something even better than the book. Don’t work on it just as a formality. And never ever try to raise questions that you don’t intend to answer in the book.

The first half of the book is close to unbearable. If you can bear it for a small sweet taste of reading a good story, read it.

This book review is a part of The Readers Cosmos Book Review Program and BlogTours.  To get free books log on to thereaderscosmos.blogspot.com