‘Something as pure as writing a book shouldn’t be a censored craft. Everybody has the right to expression, to tell stories.’

I am sure the readers who have been unfortunate enough to read books like Promise me a million times by Keshav Aneel cannot fully agree to that, no matter how much they want to.

When so many great writers still stay unpublished and unread, how come books like these end up selling more than 25,000 copies?

I guess, that lays the unfairness of this world… it’s unfair to the authors who really produce good pieces of work, when you see people picking up books like Promise me a million times instead!

Promise me a million times Summary 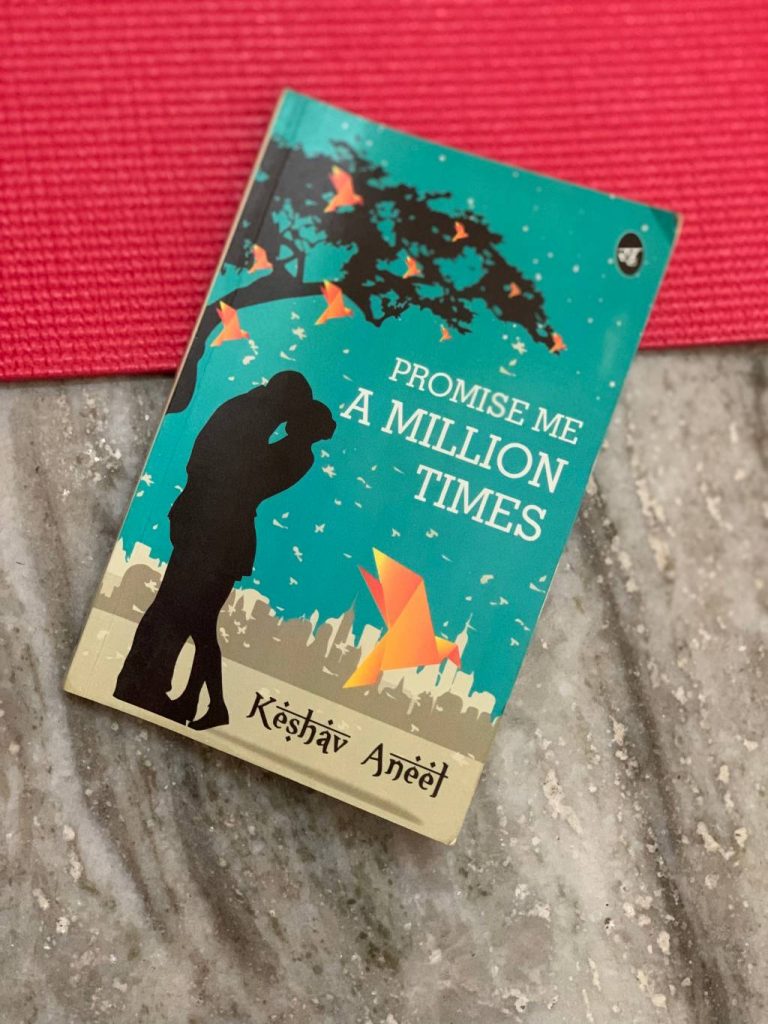 Don’t be misguided with the blurb that poses it as a ‘story about dreams, friendship, struggles & will to make up for every loss with love by your side.’ It’s a ‘story about disastrous writing, cheesy lectures, forced events to throw some moral values at you and the torture of an innocent reader.’

If, by chance, you come across this romance book and fall prey to this, I would pray for your soul to come out unscathed.

The story is about two guys who leave their little town to pursue their dreams. The author gave fictional names to the cities to, paraphrasing, ‘let you relish the book according to your taste and imagination.’

It’s about what they face in this new city while one guy tries to become an actor and his sidekick gets to narrate his story of ‘friendship and love.’

How cheesy and idiotic the book is, that you will guess from chapter one. A random guy comes and starts bitching about his parents and gets a lecture from a random auntie.

‘Sometimes we get so selfish in life, son, that we only complain about the limitation of the ones who love us.’

Our narrator, who would eventually become a star or whatever swirls in the sky, does notice this lecture of the auntie talking of how ‘cribbing won’t magnify the sympathy but would just help others classify the person’s character’ but he still writes his whole story plagued with his idiotic insecurities and attitude.

These guys get off the train, land into this new place and get to have some food… while not missing to snap at random strangers who comment on women passing by at a distance. ‘Would you say the same for your sister?’

The ‘star’ of our story does that more than once in the book… what? Ran out of ideas or is your story too repetitive like actual stars who come ‘swirling in the sky to watch over their friends?’

They find a flat and suddenly, become friends with the flatmates. In a moment. It’s a story of friendship, after all. Two seconds of introductions & they decide to hit a bar, even lend their expensive clothes to these poor souls who came from a small town.

‘I apologised admitting that most of our clothes were of the same kind – old and faded. Their slightly open mouths were enough to convey that they were feeling awkward or ashamed to take us along.’

Sad stories. One of the friends doesn’t drink tea because he promised his girlfriend she’ll make him a first cup of tea after he completes a little challenge but then, she dies two days later.

Talk about cheesy plot lines and this book is full of it. It’s the reason why chick lits got a bad reputation. It’s because the books like this get published and get the limelight.

Oh! I forgot how throughout the book, these guys couldn’t make a choice between wine and beer. They’re craving for wine, go out and have beer instead. Decide at least one thing in your life? Maybe?

Now, it’s time to find a job and even though the city is supposed to be testing and all that, he finds it in two pages.

Time to give the girl more footage in the story. So, our ‘star’ becomes a salesman and goes to sell medicine to hospitals. Get grossed out because of a ‘bleeding eye.’  Gets beaten up, only to be rescued by Aster, the other would-be ‘star’ of our story.

A lot of blah blah later, they’re both in love now. But the guy loses the job. So, now, he decides to become a writer, as he has insane amount of talent. After all, isn’t he narrating this book?

But the problem is inspiration. Now,  comes two rape stories. Judging by how sensitive the topic is, you would think the author wouldn’t have forgotten to add some real emotion into it. You’re wrong. It’s the same lecture! Like Rani Mukherji recently gave during the actor’s roundtable, just that it’s a different one this time… ‘noting the delicate nature’ of women instead.

‘A girl is not a trophy to be won … She is delicate. She is sensitive. …. she is patiently waiting for her love to get noticed.’

Yes, that’s what life of a girl is all about. Waiting for the guys to notice her love and treat her like a delicate doll she is! Thank you. I thought no man would ever notice this!  #sarcasm

Suddenly, he has the inspiration now. He starts writing.

Guess what, he’s such a nice writer that this literary agent  ‘big shot of the industry known for his ruthlessness, and more importantly, for being notoriously famous for disgracefully rejecting most of the manuscripts he used to receive’ accepts his book even before he finishes it!

As the ‘star’ of our story muses – how can this agent be a sane man? Why couldn’t he ignore the rejected stuff and carry on? Why need to humiliate someone? Paraphrased.

Can I answer this? To stop books like Promise me a million times to be published. To do his part to make people actually write a book worth-reading. Because, he worships the craft unlike the authors who produce trash stuff to become an ‘author or rich.’ Got the point? Or should I still go on? P.S. Rejection may seem humiliating to the rejected but ever thought the other person might just be doing his job? But wait! Do stars swirling in the sky have brains?

Our ‘star’ writer requires a laptop. Despite being poverty stricken, he conveniently gets a laptop on a friend’s credit card. After all, the story is about friendship! That’s the friendship you’ll see throughout the book.

He writes a brilliant story but oh my god! Somebody stole his laptop. He lost his work. Now, comes another villain who makes him feel like a ‘poor unlucky’ guy and he breaks up with the girl too, goes into depression.

One thing to note, as the story is about love too… this guy just leaves his girlfriend but doesn’t forget to write a letter to this rich guy (who his girlfriend told him is ‘the biggest jerk’) telling him he can have her.  ‘So I realise my mistake and leave Aster to you. Keep her happy in every single way possible.’

That’s the kind of treatment you see towards women throughout this book. Objectification and stereotyping couldn’t have been done better. And there are many books that objectify women. What’s my problem, you would ask?

For a book that gave me more than one lectures on being respectful towards women… feeling for women? The message doesn’t really come forward even though the words were spoken along with all the crap about delicacy and you can have her dude! stuff.

Our insane literary agent comes and encourages this guy to write again. What happened to the ruthless guy? He doesn’t exist now because your book is accepted? Convenient!

So, he writes again and is about to get published now. His insecurities are finally coming to an end… he has a job. He is about to be published. Now, he can finally stop blaming his parents and circumstances which he had done in the most whining and pitiless manner throughout the book.

There has to be a terrorist attack. And he gets shot and dies.

“She jumped on me, hugging me and crying for me to come back, but I was long gone. Perhaps her cries were too much for the gods to handle, as a rain of bullets was showered upon Aster, and she died too.”

“Every night I come along with Aster, swirling in the endless sky to say hello to our friends…” After all, the story is about friendship along with dreams and struggles.

Overall, the whole story along with writing and characters makes Promise me a million times the worst book you can ever pick. It will leave you scarred and disgusted, and with a laughing fit in the end with the whole – I maybe dead but I am going to finish the story dude! or as it is all upto your imagination, maybe I am telling you the story as a star that I have become.

It stereotypes women and the way it deals with the subject of rape and molestation, twice as it appears in the book, makes me cringe. I may not be the feminist hanging out on twitter hunting men but this kind of writing is the reason why they exist. Why bring up some issues if you’re going to belittle the womankind while pretending to ‘respect & admire’ it? What? Would that make your book less appealing?

Honestly, I can imagine the young impressionable minds who may pick up this book and may even read it seriously and I hope for the purification of their minds and souls, for all the lectures in this book – that’s not how you want the people in the world to be like, mostly.

The ones who have already read a few books in their lives would be disgusted with what they’re reading. Better DNF it before it wastes your time.