I am visiting Jaipur and thus it is impossible to not share the places I saw, with you. Today, I am going to take you to a virtual tour to Amber Fort in Jaipur. Jaipur is the capital of Rajasthan, India and is one of the most culturally rich cities of the country. The city has lots of museums, forts and shopping options which make it a very popular destination  for tourists.

This is me at the entrance and behind me you can see the amber fort jaipur and in the far left, you can also catch the glimpse of Jaigarh Fort which was used by the kings’ army. On lower left, there is a small artificial lake which was built for a very special purpose which I will explain later.

This is a small place built near the entrance footpath. And you can catch a glimpse of my guide over here too. Thanks to the fellow tourists for clicking my picture. There is a small entrance fees for visiting this fort but the visit is worth much more than the fees they take for it. I hired the guide at Rs. 200.

There is a 34 feet (if I remember correctly) long wall surrounding  the Amber Fort Jaipur as well as the city which is often referred to as Old Jaipur. The small dome shapes you can see at the top are watch towers used by guards. No one could enter the city without the guards’ permission during those times.

To enter the fort, you can either take an elephant ride or hire a jeep. But I chose the third and health friendly option which was to climb up the stairs. This is the view of the lake from the stairs and in bottom, there are elephant cages. Elephants were very moody and could go out of control. That’s why they didn’t keep elephants inside the fort but made a special place for them over here. 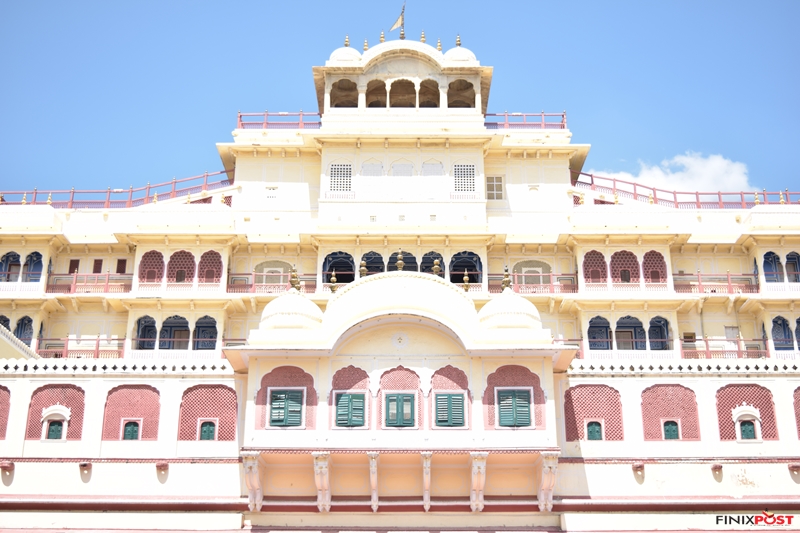 This is old Jaipur city. During the time of the kings, this was the original Jaipur. But as the population of the city increases, the king named Jai Singh shifted the city to the present Jaipur.

This is my guide. His name is B.S. Rathore and I would definitely recommend hiring him if you plan to visit Amber Fort Jaipur. He explained everything so well and so patiently… even waited for 2 hours which I spent while shopping (without complaining).

This is where the king used to hold his court. This is the same place where Akbar held his court in the bollywood movie Jodha Akbar. You would be amazed by how many movies were shot in this place and how the guide could explain the different shots they took.

This is the entrance to the palace. If I remember correctly, this door is known as Singh door/lion door.

Yes, of course this is the shot of the king’s court while I am inside the palace. But there is something amazing in this picture which you cannot see. The floor hides the huge water harvesting system designed by the kings 200 years ago. Due to lack of water and transport of water, they designed a rain water harvesting system. This storage could store enough water to be consumed for 2 years. Isn’t that wow?

I am still at the entrance of the palace and what I am touching is the paintings made 200 years ago which have never been renovated. The reason – they didn’t need to. The paintings are made using vegetable paints which don’t fade away with affect of climate or time.

Look at the paintings… not me 😛

I have taken this picture from the bathroom in the palace. But here we must talk about saffron garden. This garden you see is called saffron garden because a long time ago, only saffron was grown in this garden. Now is the time to explain why an artificial lake was built. Saffron was to be used as a sort of room freshener for the entire fort. But saffron couldn’t grow in climate of Jaipur, Rajasthan. So this lake was built around the garden which cooled down the garden and thus made it possible to grow saffron in it. Due to climate change, it is impossible to grow it now and thus the saffron garden is just a name at present. The plants here are normal plants.

That’s the stair case I used to reach the fort. It was quite a good exercise. 😉

I loved the view from the bathroom. Really 😛

This is the bathtub used 200 years ago. There is a very nicely planned heating system which was used as a water heater. And we think we are smart to use geysers etc. If you ever visit Amber Fort Jaipur, don’t forget to ask how the whole water system worked. The engineering plan is awesome.

This is one of the most famous attractions of this fort. The glass used in this area was imported from Belgium 200 years ago and it took 3 years just to import the glass. The place is amazing. And you can click some really cool pictures here. Ask your guide for the photography tricks in this place.

This is a view from a place where queens used to sit to see the court’s hearing or attend any functions. They were not allowed to go in the public. This was done after the king Allaudin Khilji fell in love with a queen and declared a war with her husband. From then onwards, queens had to follow such rules.

The unique part of this place is while queens could clearly see outside as you saw from the previous picture, no one could see the queens from the ground floor. Engineering 😛

This is the garden besides Sheesh Mahal. Don’t look at me but look just beside me on left side in the back. That place was where the old air conditioning system was installed. The place had a water passage which flowed through the hall. There were curtain installed so that when water flowed, some of it fell on the curtains and cooled the entire hall. The water was not let wasted and the garden is actually  a system designed to reuse the water by restoring it after it went through the fountains. Can you wonder how much thought they gave into each thing?

This might seem to be  a shabby place but those degrading buildings at the back were a part of the actual palace of king Man Singh. When he became a chief commander in Akbar’s army, he made a deal of conquering the west in name of Akbar while he got to keep all the money. Then he used that money to build Amber Fort Jaipur.

These are the big utensils used in kitchens of the king. These are the same ones where Jodha cooks food for Akbar in bollywood movie Jodha Akbar and then magically gets transported to fort at Fatehpur Sikri for the next scene of making Akbar taste the food. 😛

A close look at the entire air conditioned hall.

Behind Amber Fort, there is the India’s only Krishna Meera Temple.

This is placed at the entrance of the temple. In center, you can see the vehicle used by Lord Vishnu – Garuda.

Krishna Meera temple from inside.

The temple looks great from outside. Doesn’t it?

I loved how the guide told me about the best places to take pictures O:)

Trip to Amber For Jaipur was one of the best experience I had on my trip to Jaipur. But there are many things I did before visiting Jaipur and many tips which I have for you if you’re planning a trip to Jaipur. Check out my new posts for more tips. And do share this if you like it.

Note: In case you want to use any of these pictures in your website, feel free to use them but don’t forget to leave an attribution to http://www.finixpost.com

A Comprehensive Guide to Luxury Getaways Around the World

A Historical Exploration of Bijapur

What To Eat in Elante Mall Chandigarh?

Everything I Discovered Through My Visit To Manipal

5 Places You Must Visit on a Trip To Jaipur