Fantasy novels by Indian authors are seldom published, even now with all the craze for Indian novels, and when they’re, the reader in me is utterly delighted.

I look forward to reading these books… especially, if they’re not basic retellings and reimagining of Indian mythology. Hence, when I came across Nasteya: The Aryan Saga by Kiran Nirvan, I knew I had to pick it up. 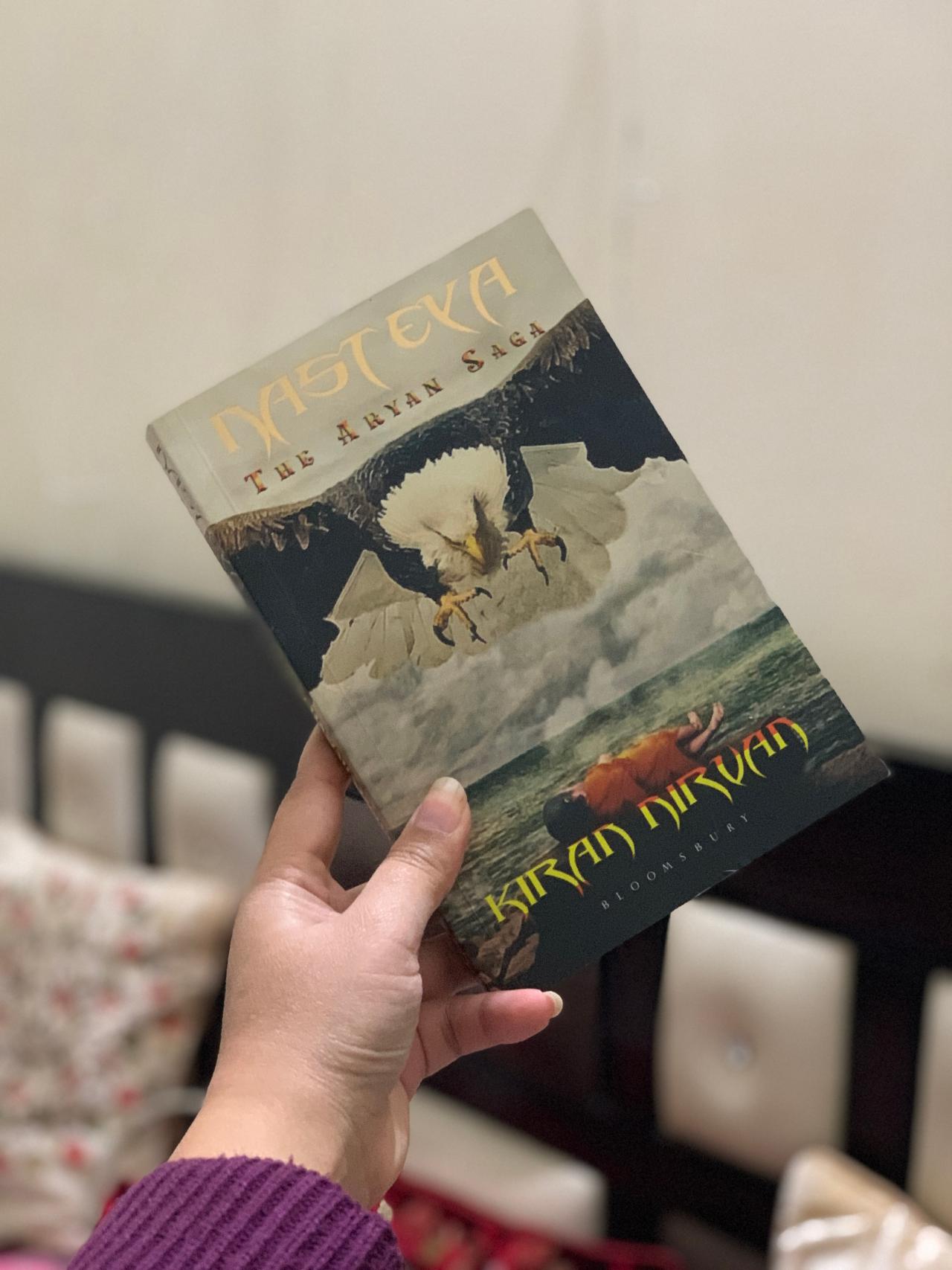 With a giant eagle in the cover and a newborn lying on some rocks at the edge of an island, your curiosity is further peaked, making you feel the urgency to read it.

Nasteya is a young, fearless and powerful warrior. The hero. One day, everything is snatched away from him – all the people he loved, and everything he looked forward to in his life.

Finding himself driven by vengeance, the only thing he’s left with, he goes on a quest that may lead him to discover several shocking truths about his identity. Mysterious and barbaric enemies await him now in The Aryan Saga.

Considering it a fantasy novel with a huge plot, it clearly has several characters. As a quest awaits Nasteya, several other characters are introduced in the story… some of which become an integral part of the story.

The story is narrated by Vasu, best friend of Nasteya since childhood, who idolises him. He’s talkative, opinionated, thoughtful and loyal.

There’s Saavn, Nasteya’s brother, who has always been jealous of him.

There’s a kid, who again, idolises Nasteya. His father. Some new creatures… eagles, yetis, white demons, and many more characters and creatures come up in this long quest.

But sadly, by the end of the book, you’ll realise that there was no real space given to any other character in the story. It’s just about Nasteya. All characters are merely the props to tell his story… now, it’s not a bad thing depending on your taste.

But I am the kind of person who, if reading, harry potter, is also interested in Ron, Hermoine, Dumbledore, Sirius Black, Dobby, Malfoy, Ginny Weasley, Weasley twins, Weasley family, Tonks, Remus, and seriously! everybody else.

So, for me, to feel that nobody really matters but Nasteya throughout the story… it wasn’t a pleasant experience.

As a character, Nasteya is the protagonist of the story. The whole story is the epitome of obsessions about Nasteya, yet throughout the story he stays very mystified. Why so? Was it the narrative that crippled this character or was he just purely overlooked by the author?

And the final blow was the treatment to the women characters… they’re non-existent, first of all. When they exist, they barely play a role. Hint: The yeti women. And when they play a role…

‘… fell unconscious. She didn’t have the strength to see.’

After she has been a part of a rebellious group, and accompanied a hero on a dangerous journey and then came to help even when she was left behind? Okay.

The only daughter of a king? A princess? And this is the role she plays?

The very beginning of the plot of the book – well, let’s discuss the titles of the chapters. Seriously, on page 143 in the book, I was in love with the titles – they had been simple, descriptive and exciting.

But by the end, they just crossed the line – they got too descriptive and gave away the entire plot of the chapter. All the anticipation you manage to muster up while reading the previous chapter is pricked quite viciously as you read the title of the next chapter.

‘The plot that failed’

The plot begins at a very interesting point. A quick introduction and you get to know Nasteya is about to be the king. And then the twists unfold. Soon, their journey begins. And they move across several hurdles, meet new people, and discover new facts.

But as they move on to the second part of their journey, towards, Mehrgarh, the things start to become too predictable.

They go to the land and of course, Nasteya invites trouble… as his character has been doing since the last 150 pages. And of course, things just fall into place, naturally as they had been doing in the past.

Though the journey and the characters and the motives change, the plot basically moves just the same.  You can always guess what will happen next and there’s barely any chance for anticipation or excitement to build up.

As if predictability was a small issue, things become far too convenient. Everything is just falling in place… characters trust one another, just like that, fall in love (even faster than love at first sight story would proceed) and conflicts are resolved even before they’re ripe.

Even though Nasteya is the ever so powerful and special hero, it’s way too simple for my liking. The whole book reads like this guy has no real troubles at all… he can resolve conflicts with a few dialogs and kill hundreds with just a few punches.

And honestly, I would love such a hero but this is a ‘too unbelievable’ kind of hero… already distanced from me because of the writing and then, because of his deeds.

And the pace of the story… more effort is on the introductions than the actual conflict and its resolving… there are several instances in the book where it was possible to bring in the climax and entice the reader but all of it wasn’t properly used.

As if all that wasn’t enough, the writing makes it even more predictable and convenient. The way the story of the king and his evil brother is described… you know what’s going to happen and who’s who but then… ‘the king was my father… and I was the girl.

’ Why O’ why? Why everything put out so flatly, all in one paragraph?

The beginning of the book has a very poetic style of writing. The dialogs are long, descriptive and poetic, giving you vibes of listening to a period drama. However, as you proceed in the novel, the writing style falls to normal dialogs and descriptions.

With that being said, I liked both of the writing styles I saw in the book. I liked the descriptions, especially of the creatures in this fantasy world, and I liked the dialogs – both times – when they were long and poetic and when they were simple and short.

However, a question still riles my mind. Why change it? Why not stick to one writing style? What happened? What didn’t?

Discussing the basic writing style, it’s smooth and easy to read. Considering a lot of Indian readers are new readers, I would suggest it would be a breeze to go through this book, even for them.

Overall, I appreciate the story and world building. I also like the smooth writing and I also like the complexities that were attempted to put in the plot. However, all of those had flaws that I couldn’t ignore.

Yet, for an Indian fantasy novel, I am still glad I read it and spent my time on it.