After reading the amazing mystery novel The Curse of Surya by Dev Prasad, I really wanted to ask some questions from the author. As I was thinking of finding a way to contact the author, the author himself commented on the review post I did. And thus I had the email id and all I needed to do was ask him for an interview.

To my good luck, he agreed and I sent him the questionnaire which I had already prepared (being positive never hurts 😉 ). What I got in response was a wonderful set of answers which I am going to share today. So, this is the interview of Dev Prasad, the author of a novel I loved reading – The Curse of Surya. Do check out the review first to know about the book. I am a senior IT professional working in Bangalore. It was quite by accident that I got into writing. During the winter of 2005, I went on a family trip to North India. I discovered that while there was plenty of tourist information about New Delhi and Agra, there was hardly any information about Brij Bhoomi (the region in Uttar Pradesh which is associated with the pastimes of Lord Krishna).

It consists of towns such as Mathura, Vrindavan, Gokul, Goverdhan, Raval, Barsana, Nandagaon, etc. These places and the associated legends fascinated me. However, I also felt sad about the lack of tourist information about these places.

I decided that if the existing travelogues and tourism websites didn’t give sufficient information, so be it; I will write my own travelogue! This was the beginning.

During 2006, I decided not to restrict my book to just Brij Bhoomi but to expand it to cover the entire life of Lord Krishna. This decision took me to Dwarka, Porbandar, Prabhas Patan and Somnath in Gujarat and Kurukshetra in Haryana. My efforts bore fruit and my debut book “KRISHNA: A Journey Through the Lands & Legends of Krishna” was born.

During my visits to all the sacred places in UP, Gujarat and Kurukshetra, many questions remained unanswered  –

These thoughts continued to haunt me not only during my visit to these places but even after my first book was published. It was then that I decided to write a fiction, trying to knit together all these mysterious places and unanswered thoughts. This is how “The Curse of Surya” was born.

I was a novice to the publishing industry when I wrote my first book. I was not even aware of some basic necessities like having a good Literary Agent and how to do a proper submission. However, I was very fortunate to get Jaico Publishers, one of India’s leading publishers to publish my first Book “Krishna: A Journey Through the Lands & Legends of Krishna.”

After the book was released, I realized the need for me to travel across the country and meet my publishers’ sales teams (at different regions), bookstores staff and the end customers (readers). It was very exciting to interact with people from all walks of life. It was also heartening to get very good Book reviews from more than twenty leading newspapers in India (English, Hindi, Kannada, Marathi, Gujarati, Telugu and Tamil).

The icing on the cake was the book getting short listed for the Vodafone Crossword Book Award. Overall, it was a fantastic experience.

You can judge a book’s performance using two attributes – the sales figures and the readers’ feedback.

It is still early days so a bit difficult to comment on the sales numbers. However, I am very pleased to see that the initial feedback from the readers has been very positive. Apart from the good reviews that have been posted on many blogs and other websites (such as Goodreads, Flipkart and Amazon), I also received lots of appreciation emails from many of them. Some of them have been suggesting that I should make a movie out of it!

I already suggested this book as a good plot for a bollywood movie on Quora. 😉

5. If you had to give one reason on why people must read your book The Curse of Surya, what would it be?

“The Curse of Surya” is not only a fast paced thriller, it also has loads of information about Indian History and Religion. I have visited all the places that feature in the book – Singapore, Agra, Mathura, Dwarka, Bet Dwarka, etc. on numerous occasions and have done extensive research on these places and the associated legends. This makes the information very authentic. The book attempts to transport the readers to these places and make it an enjoyable experience. The reader will not be able to differentiate fact from fiction.

And this is why every placed described in the book seemed so fantastic.

I am currently co-authoring a fiction which is once again a crime thriller with a mix of History and Religion. This time it is Christianity ! The manuscript should be ready by mid of next year.

Don’t forget to send me a copy 😛

My favourite author is P.G. Wodehouse. I love his subtle British humour. I have read most of his books multiple times. During my childhood days, I used to read Sidney Sheldon, James Hadley Chase, Agatha Christie and Erle Stanley Gardner – basically fast paced thrillers and murder mysteries. I like to read books that make me to think and analyse.

My writing style has been greatly influenced by Sidney Sheldon. Most of his books have young, intelligent, beautiful women as the main protagonists. In most cases, they find themselves in deep trouble but come out triumphs, thanks to their intelligence, grit and determination. You will notice this trait in my book too. (Of course, I did.)

I have received many mails, especially from women readers, stating that they loved the strong protagonists like Sangeeta Rao and Nisha Sharma in my book. Some of them have even asked me to write a trilogy involving these two protagonists! (I am one of those readers too , just too lazy to write an email 😛 ) 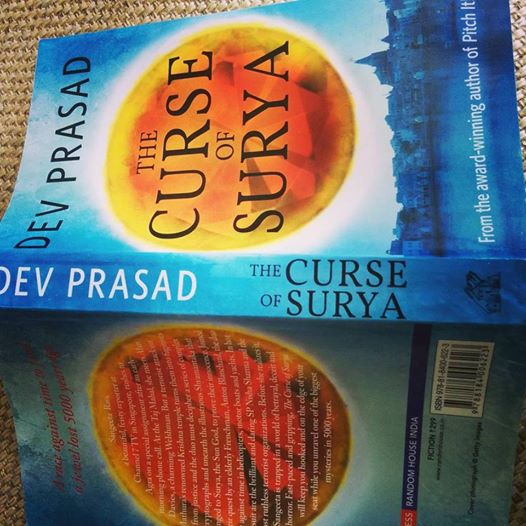 Around 10 years ago, India had very few English writers. Thanks to role models like Chetan Bhagat & Amish Tripathi, this has drastically changed. These days, everyone wants to be an author. When I enter a Bookstore and see the “New Arrivals” Section, I feel India has more writers than readers.

The strong presence of social media and online publishing has also played an important role in the surge of the publishing industry. If writers are unable to get good publishers, they have the option of doing a self publication, with support from online Bookstores. While earlier, the authors were worried about marketing self published books, these days they market their books aggressively via social media like Facebook, Twitter, etc.

However, the flip side of this has been the deterioration in the quality of writing. Many upcoming authors are spending too much time on promotion and far too less in the writing. The quality of English has definitely deteriorated. I cringe when I read some of the so called present day bestsellers.

Completely agree about the quality of writing part. Most self published books in India are a pain to read. Ask me if you want examples/evidence. 😉

One of the important lessons that I learnt while writing my earlier Book “Pitch It !” (Management genre) was – “Always go by your heart. Never write keeping an audience in mind.” When I sent my draft Manuscript to a few friends for a critical review, all of them gave me the same feedback – that they enjoyed reading the Book, except the first chapter.

I did a bit of introspection and realized that I had written the case studies of the first chapter keeping a target audience in mind whereas the other chapters were written from my heart. Inwardly, I was myself not convinced about the presence of a few case studies that featured in my first chapter. I revamped it completely and re-sent it to the same critics and thankfully, this time received very good appreciation.

Looks like I need to buy two new books…

In the present context, promoting via social media is very important. With attractive tweets and Facebook posts, an author can reach thousands of readers across the world in a matter of minutes.

Having said that, it is important to remember that however much you may market and promote your book, it is finally the contents of the book that matters. Self promotion by an author is good, but don’t go overboard about it!

I love travelling, reading, listening to music and sports like cricket, tennis, badminton and chess. I try to reach out in the social sector by helping underprivileged and disabled children.

I also get invited to deliver talks on “Leadership / Management” at some of the premier Management Institutes, Management Associations and corporates.

Wow! This is officially one of the best interviews I have had on Finix Post so far. Loved all the responses. And I really want to thank the author for taking out time for this interview. If you also loved the answers and enjoyed reading it, show your love for the author by commenting down below and also consider his book The Curse of Surya as your next read. It is really good.