“Innovation has no limits, especially when it comes to food.”

That’s how you feel the moment you step inside this place called Hunger station. Funny food quotes hanging on the wall to their colourful seating area and the concept of having a single food court styled restaurant; this place gives you a homely feeling. Surrounded by more than 50,000 corporate offices, this place is one-stop for your coffee or lunch breaks, office parties, client meetings and even a date. The quick takeaway available can help you when you want just to relax at home after a busy day at work but eat good food while watching Game of Thrones. You can also call them and ask them to prepare your food before you reach to save up more time; after all, time is money. 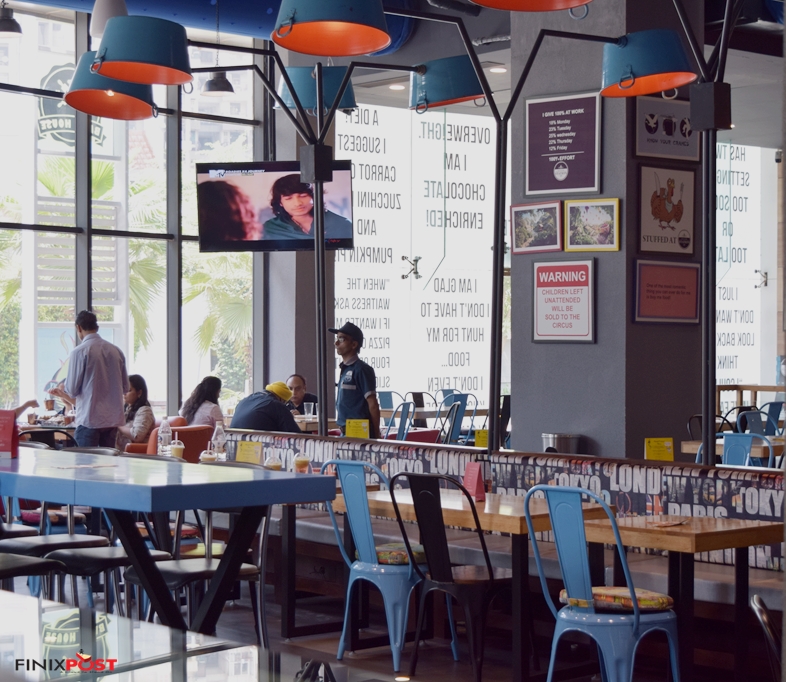 Coming back to the Hunger Station, the food court style layout makes it unique and convenient. Their whole menu has been divided into five different food stations –

Grill & Gravy (to satisfy the ‘desi’ in you with dishes like butter chicken, tikkas, dal makhani, raita, chapattis and more),

Steam Pot (for the health freak in you with dishes like dimsums, idli, steamed dishes inspired from Sri Lankan Cuisine),

Stir Fry (to satisfy your cravings for Chinese food but with a twist; dishes like spring rolls, noodles, fried rice and more along with some gravy based dishes inspired from various international cuisines) and

Chill Factory (to satisfy your sweet tooth and quench your thirst with a number of desserts and beverages).

Let me warn you what’s in this section. I tried a lot of dishes at this place and I am going to scrutinise every dish I tried and tell you if they’re worth trying. It’s a self-service place, so you go to the billing counter, get a card recharged with the desired amount and then go to any of the stations mentioned above and order delicious lip smacking food.

For your convenience, I am going to arrange the dishes I tried according to the respective food stations. Are you ready to begin this journey? 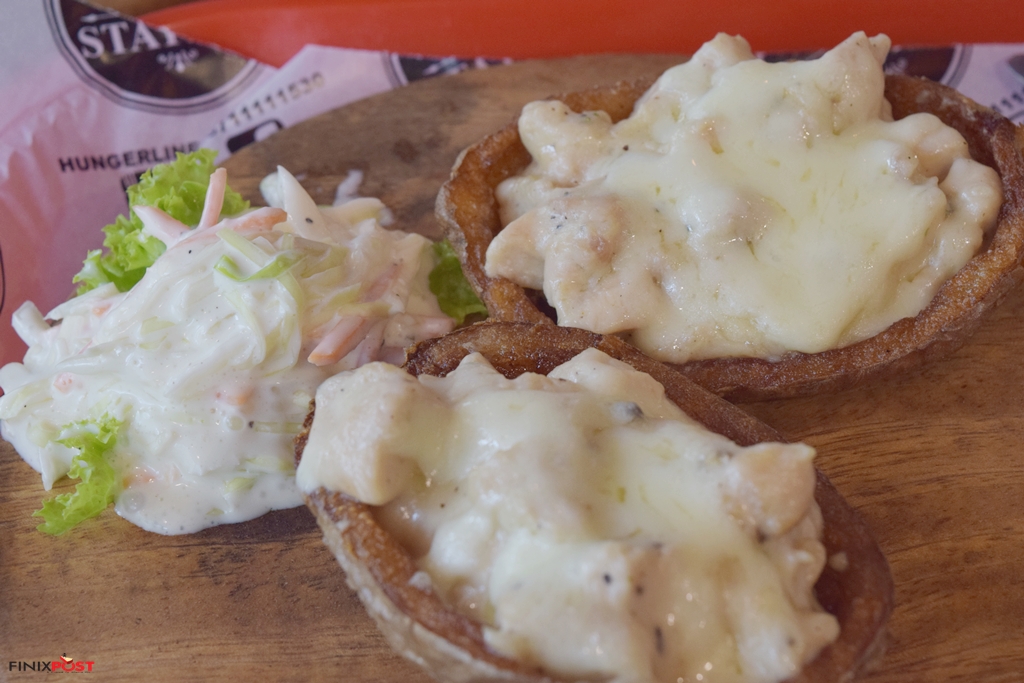 The potatoes were nicely baked. They had scooped out the potatoes from inside and had filled those with a filling made of chicken and cheese. The crust wasn’t that crunchy and as it’s a non-Indian dish, it was bland and didn’t tickle my Indian taste buds. The chicken and cheese filling was very creamy & cheesy and complemented the baked potato scoops. The coleslaw served with the dish was fresh and delicious. 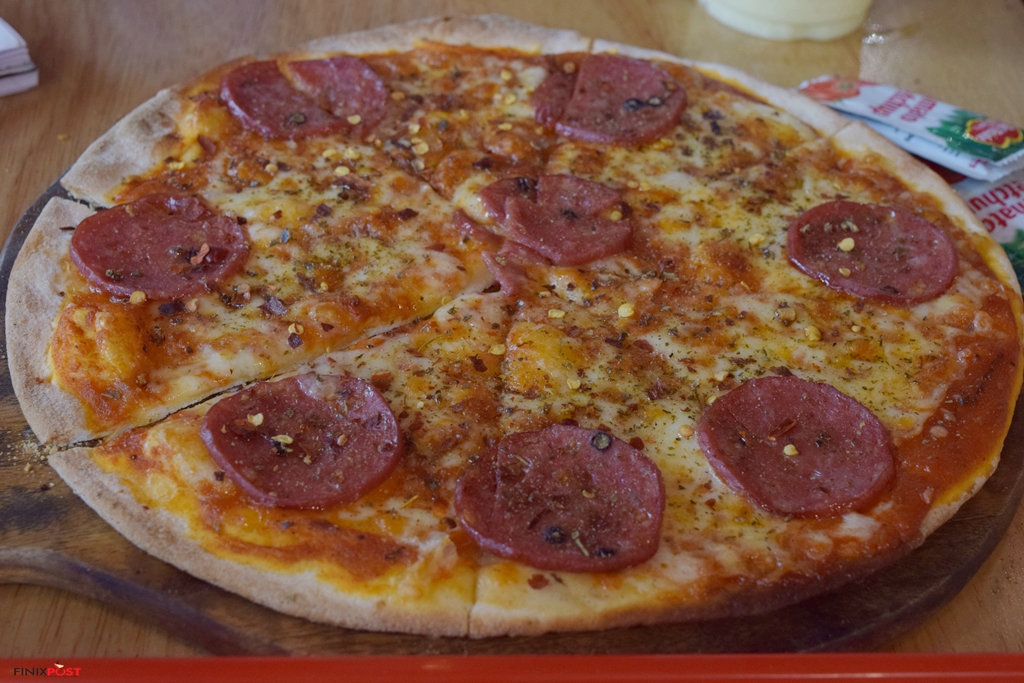 Being a pepperoni pizza fan, this is something that I try wherever I find it on the menu. The pizza was a medium sized standard pizza with a thin crust. It was spicy. The base was crunchy at the end, but a bit chewy in the middle. The pepperoni had a very smoky flavour to it (love it!), and went well with their in-house pizza sauce and mozzarella cheese. Some pepperoni pieces had crushed black pepper pieces on them which somehow overshadowed the real pepperoni flavour. 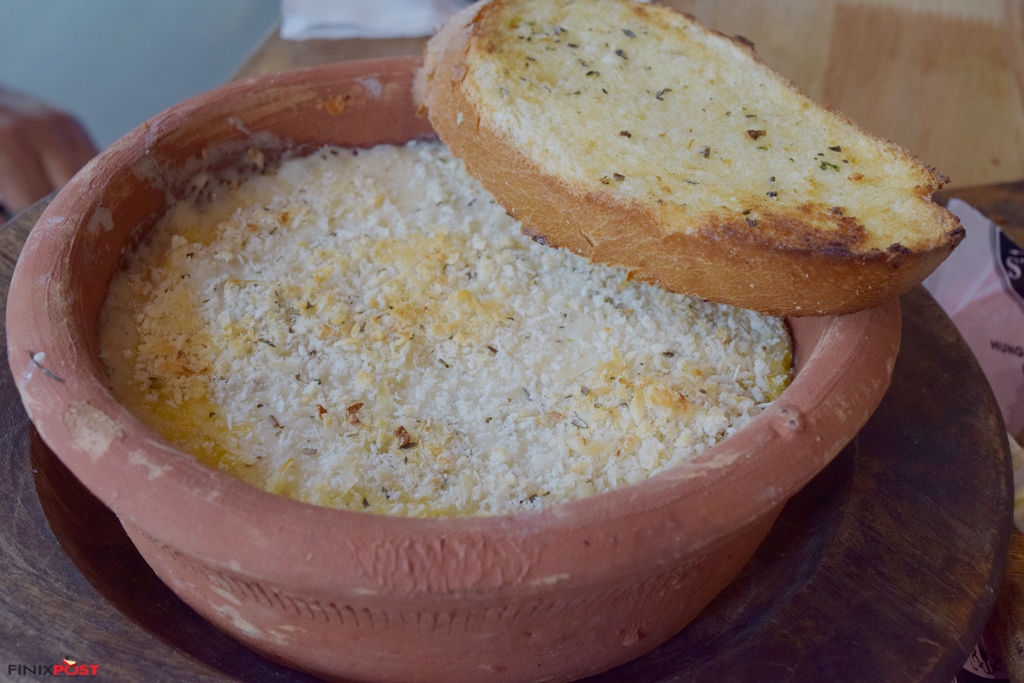 Coming to one of the oldest pasta recipes from Italy, the chicken lasagne in the Hunger Station was good. They had cooked it in an earthen pot and baked it in their special wood fired oven which imparted a great earthen as well as a woody flavour in the lasagne. The shredded chicken had great texture and was cooked in a finger licking pasta sauce; the pasta sheets were very soft; plus the cheese on top of the dish gave it a creamy and cheesy flavour.  Though I missed the authenticity in the dish as there was little cheese between the layers, I believe it’s a must-try dish at this place. It was yum! 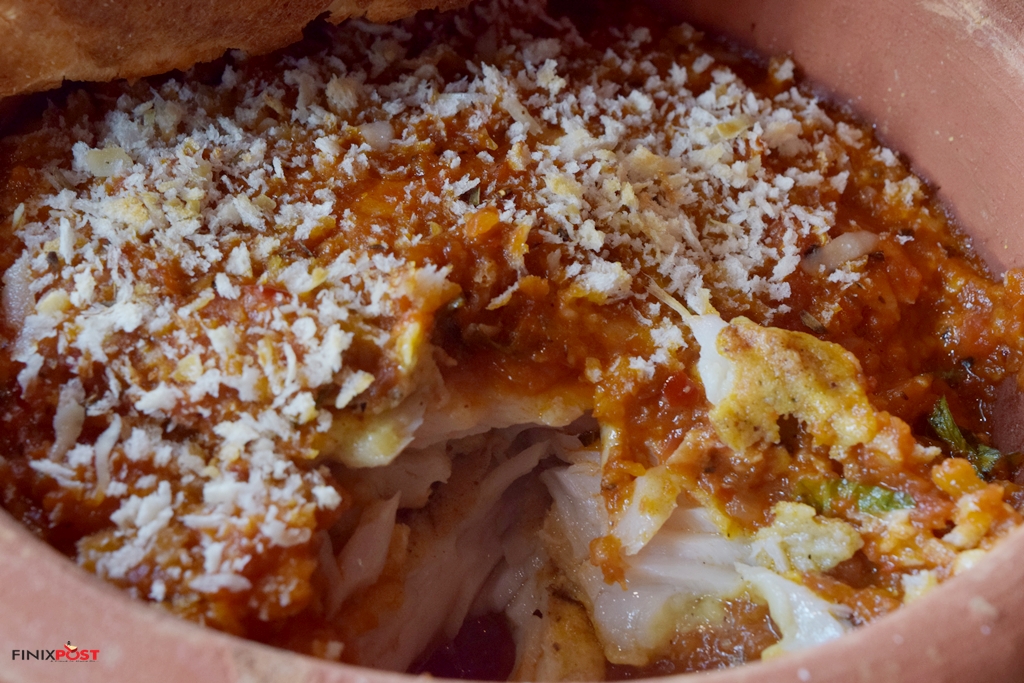 The tomato sauce in the dish was almost the same as it was in the Lasagne but the fish itself was tender, juicy and retained its real flavour. As a whole, the dish didn’t exactly taste like Lasagne, but it somehow gives you a hint that you’ve had it before. Of course, if you don’t go for Lasagne (don’t do it, lasagne is a must!), you will enjoy this dish to the fullest. 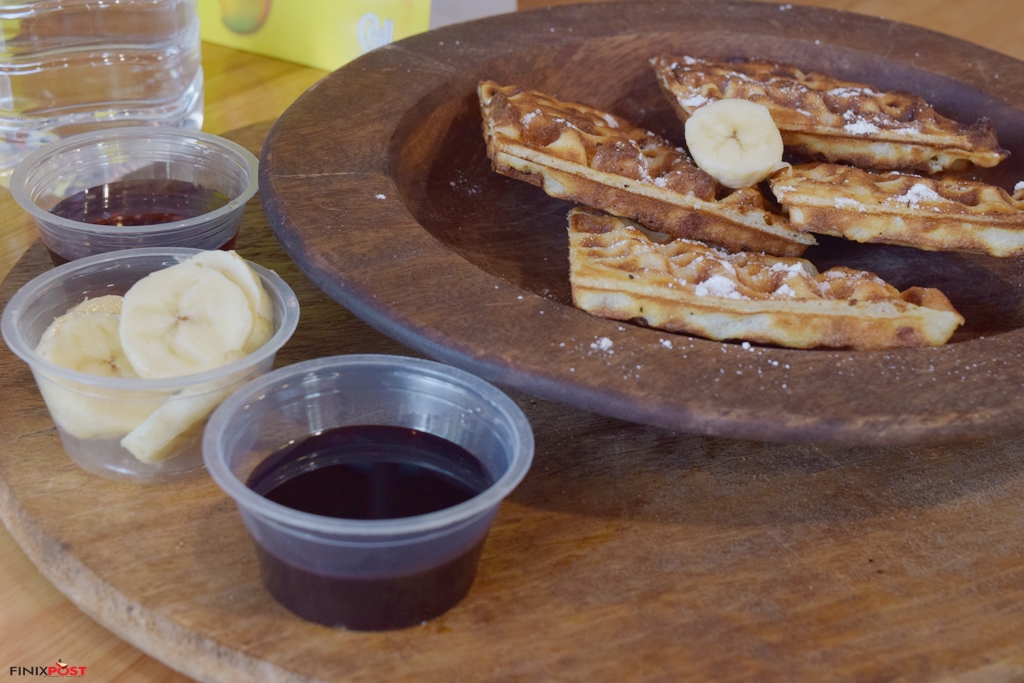 My vegetarian counterparts ordered the waffles that were served with chocolate sauce, maple syrup and bananas. Though I didn’t try those, they looked good. 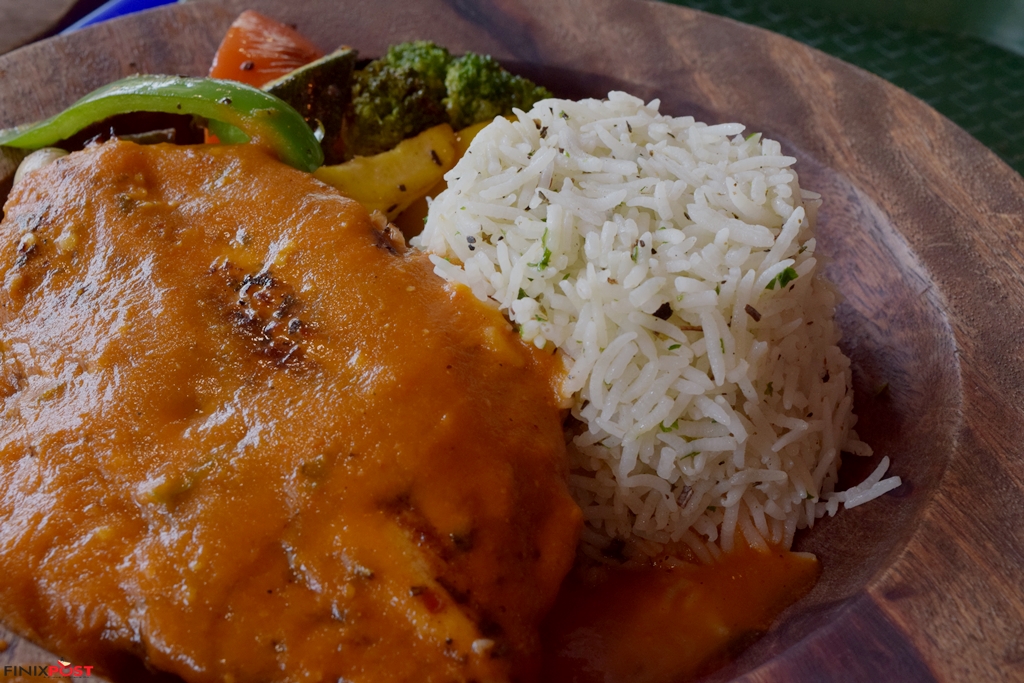 The grilled chicken wasn’t that soft but was incredibly juicy. Their in-house Piri Piri sauce was delicious. The oregano seasoning on the chicken enhanced its flavour. The grilled vegetables were perfectly cooked; not too raw, not too cooked. They were exactly how I had tried to cook my veggies since over a year (but failed) and they had that barbeque sauce flavour in them. They served it with rice but because the dish didn’t have that much gravy, I didn’t understand the purpose for the rice. I feel just the chicken with veggies is something you must try! It’s a healthier version of tasty food and is certainly one of my favourites at the place. 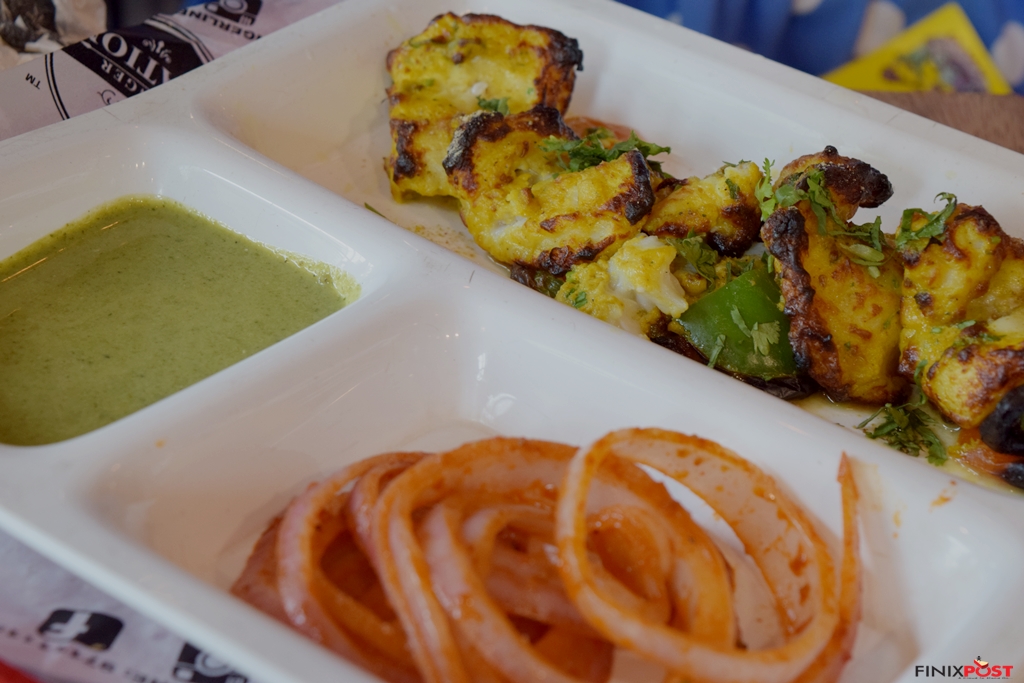 The tikka itself was good. It had those smoky edges which imparted a great smoky flavour to the fish. Marination was somewhat less Ajwaini but the factor that the fish had retained its original taste and blended well with other flavours made this dish awesome. The green chutney they served with it had a very strong green chilli and mint flavour; so it tended to diminish the taste of the fish tikka. 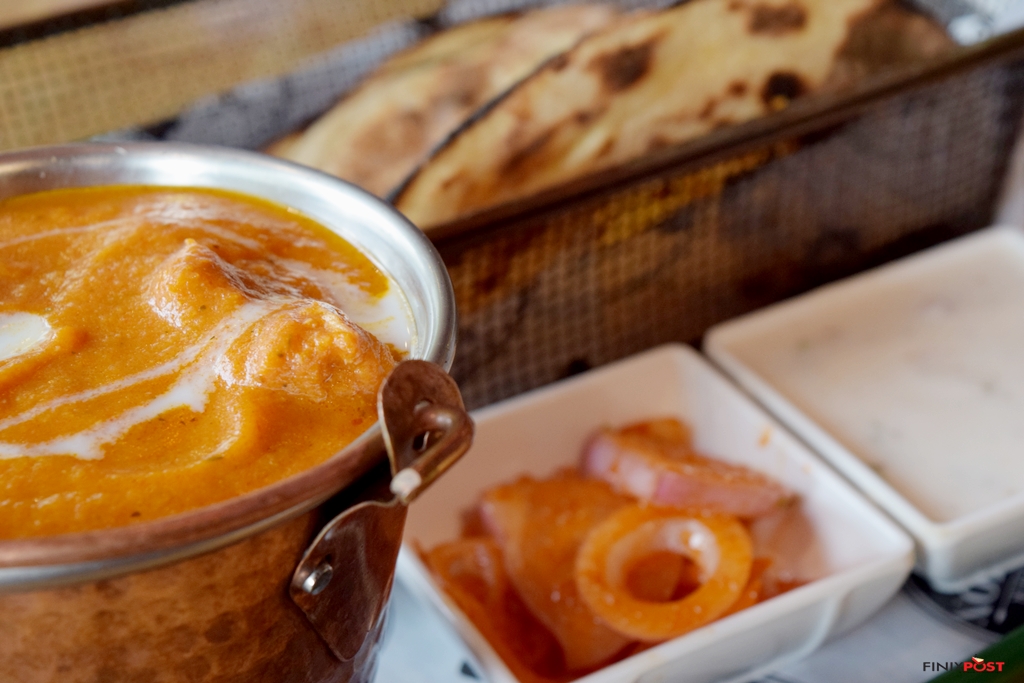 The murgh makhani had soft and boneless chicken pieces, cooked in tomato and cream sauce, and had an authentic and creamy taste. The butter brought all the flavours together. It was served with lachha parantha, onion salad and raita. The raita was the yummiest raita I have tried in any restaurant and I simply couldn’t get enough of it. I loved how they had mastered this very basic dish as a whole. Lachha paratha was very soft. 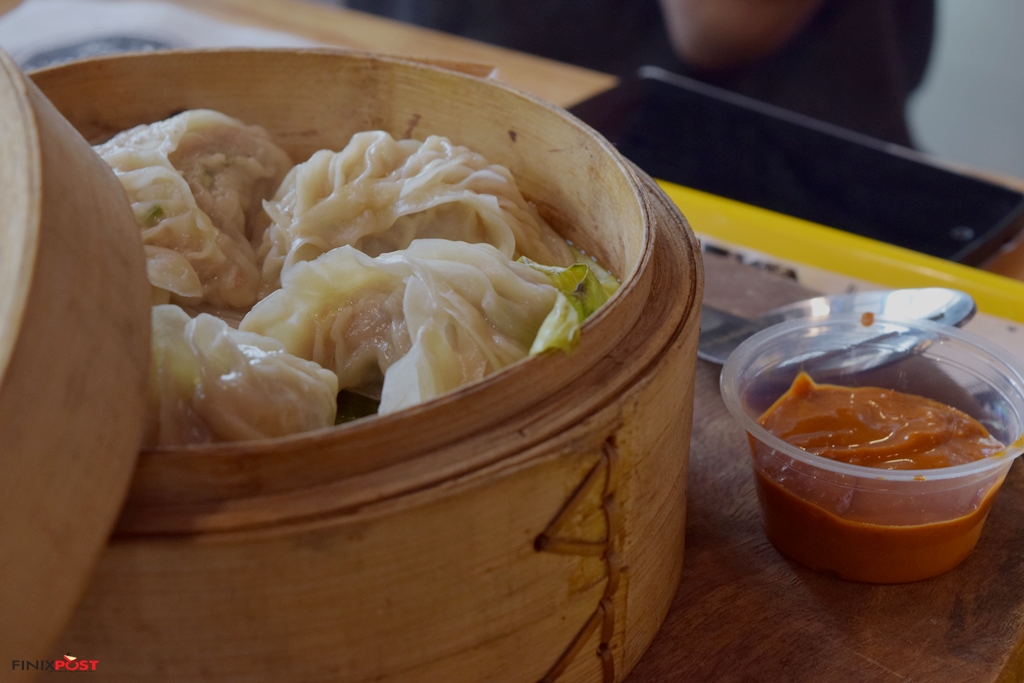 Chicken Momos were served directly in the wanton wooden steamer and hence, were steamy hot. The chicken filling was very spicy but juicy and the steamed flour shell was perfectly cooked and wasn’t hard or thick even at the corners. The dip served with the momos was spicy and complemented the taste of momos well. 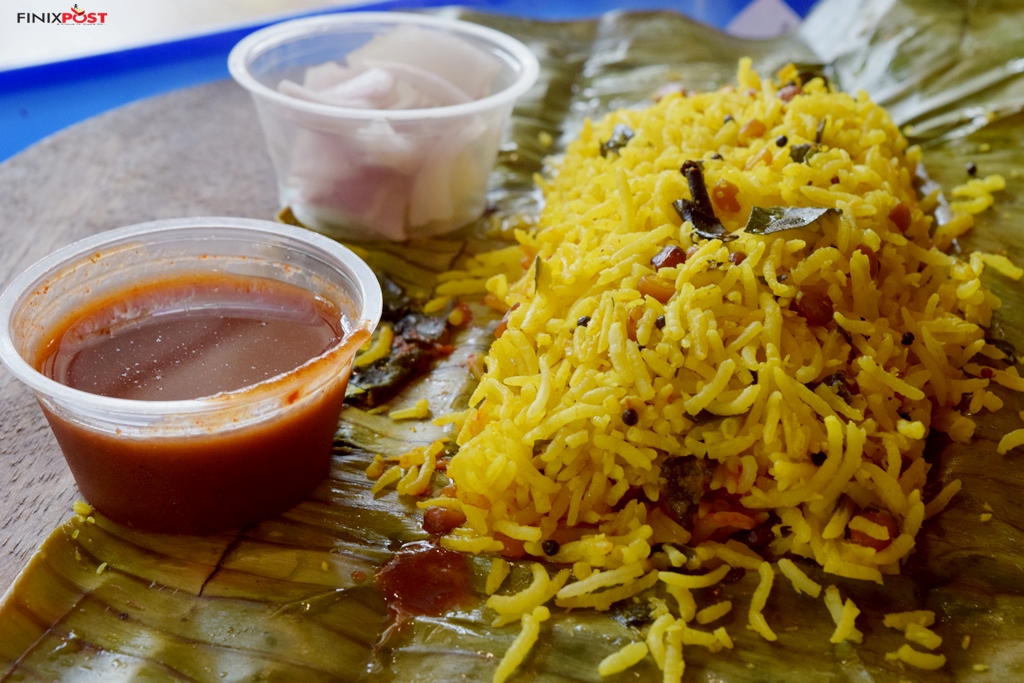 The dish came wrapped in a banana leaf and the moment I opened the blanket, the southern flavours enticed me. The rice coating hid the chicken beneath it. The incredibly soft chicken was refreshing and juicy. I believe it will make a great breakfast dish. The chicken was coated with rice mixed with moong dal and another seasoning that tasted very much like the South Indian Poha. I haven’t ever tried Sri Lankan Cuisine but I believe my first experience was quite good with it. 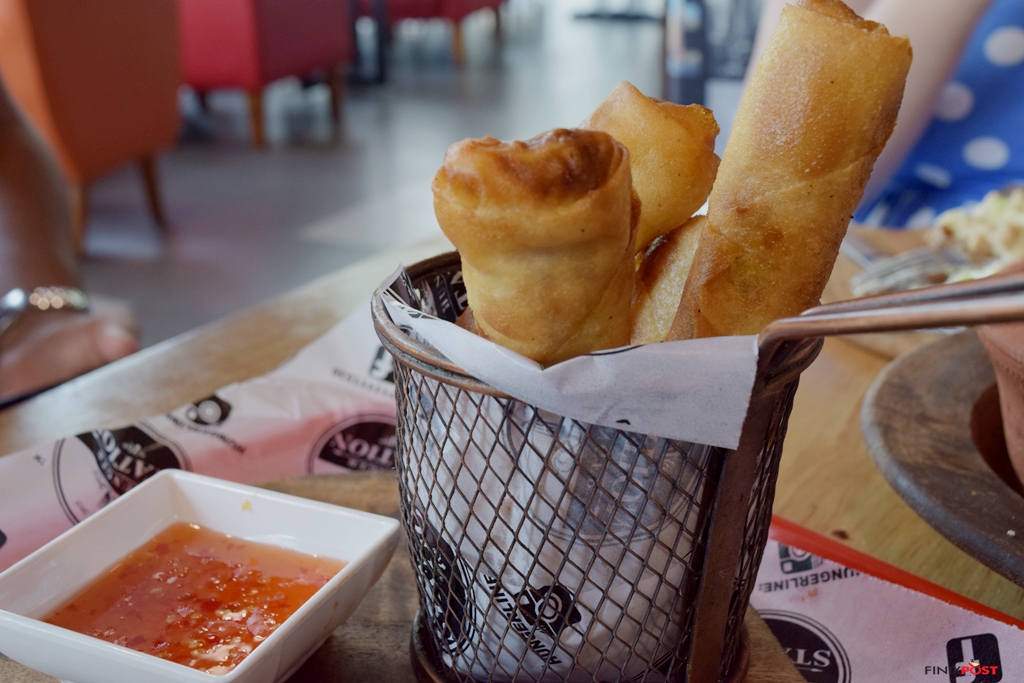 With the crunchy thin crust, spring rolls were finger licking. The filling had a Chinese touch tasty filling of onion, cabbage, carrots and chicken, and the dish was served with a hot and sweet sauce which complimented the rolls well. The veg spring rolls also had the same filling except the chicken. One thing you should try in this place is these spring rolls. These were one of the best I have ever tried. 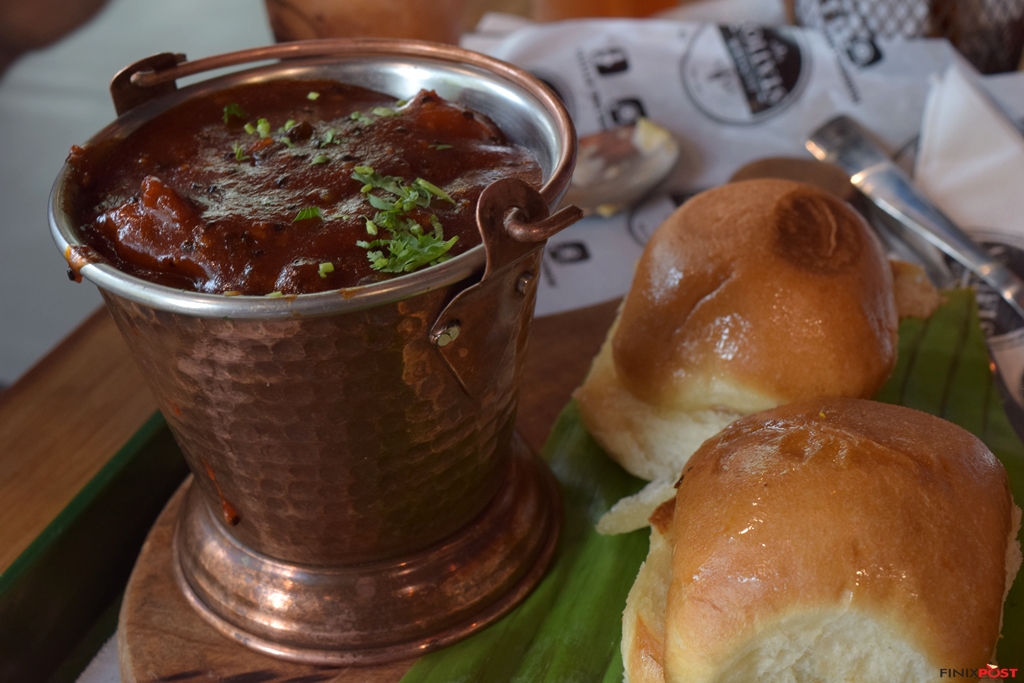 This dish has been influenced by Iranian cuisine. The base of the dish is tamarind, which gives it sweet, sour and spicy taste. Chicken pieces were soft and lovely and went well with the gravy but the gravy itself was a little too sweet for me. Pavs were soft and buttery. All in all, it’s a unique dish that you should try. 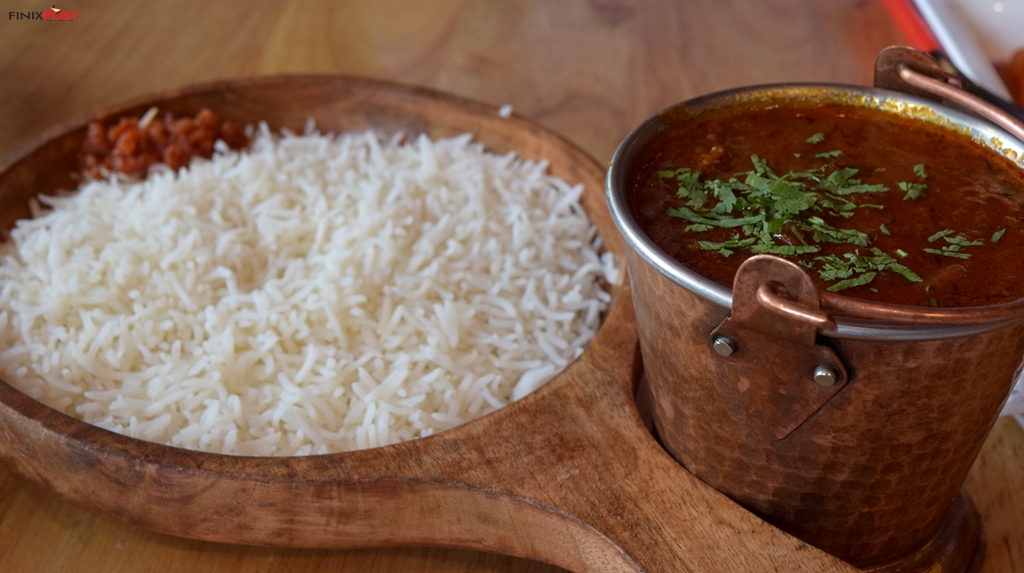 This was the spiciest dish on the menu. It’s served with small boneless mutton pieces in very spicy gravy served with rice. The mutton pieces were tender and soft & had the tinge of the real mutton flavour to it; which some of you might not like but I love that mutton flavour. The gravy was delicious and spicy. Instead of rice, I would have preferred the dish with some bread like naan or lachha parantha. 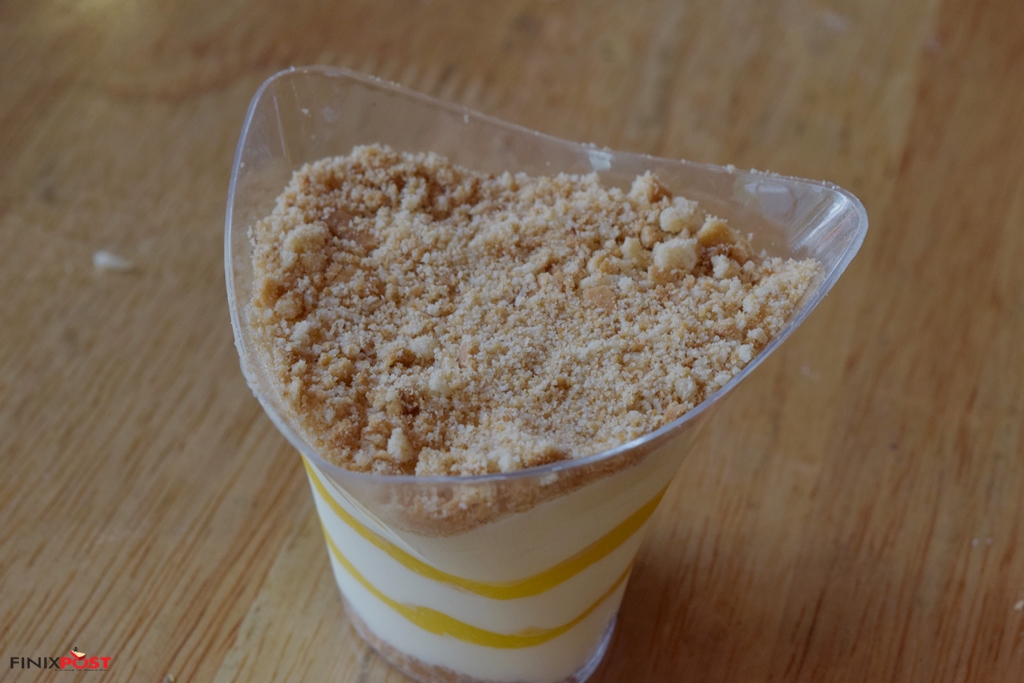 After our tummies had been full, I didn’t have much appetite but this dessert with lots of mangoes would make you hungry. The bread crumbs gave it a different texture and it certainly tasted better than any cheesecake I have ever tried. The smooth and tangy mango flavour is fresh and refreshing. 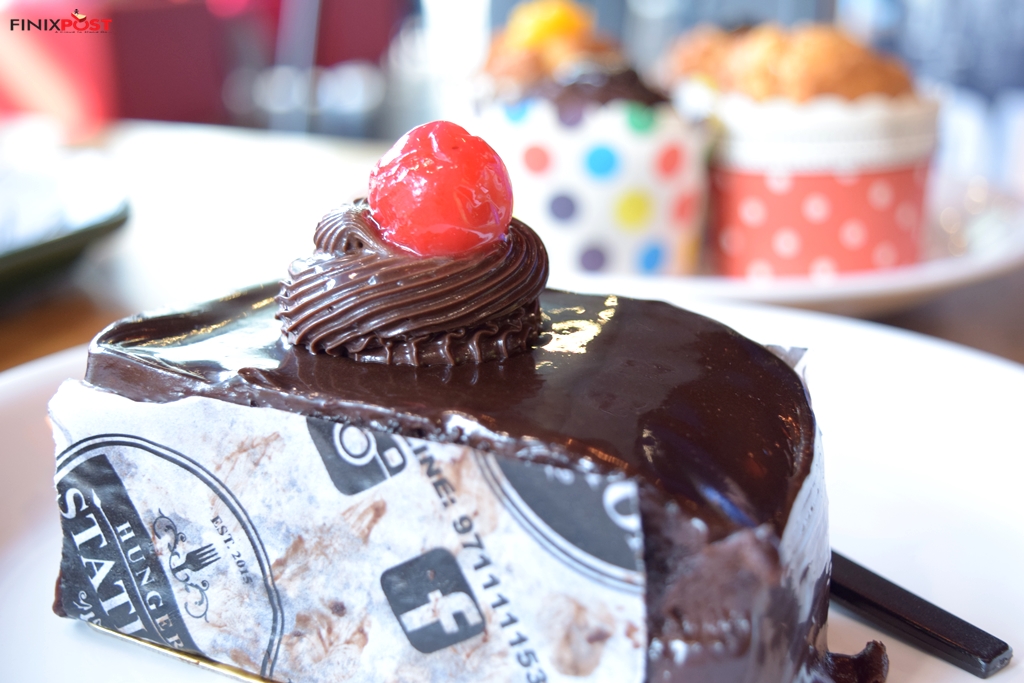 This pastry was covered with thick layer of chocolate. From the outer look and from the effort I had to make to take a bite with a spoon, it seemed it was hard but all I had to do was wait until this thing landed on my taste buds. It was delicious. The chocolate just melted in my mouth and I gulped the entire thing happily. 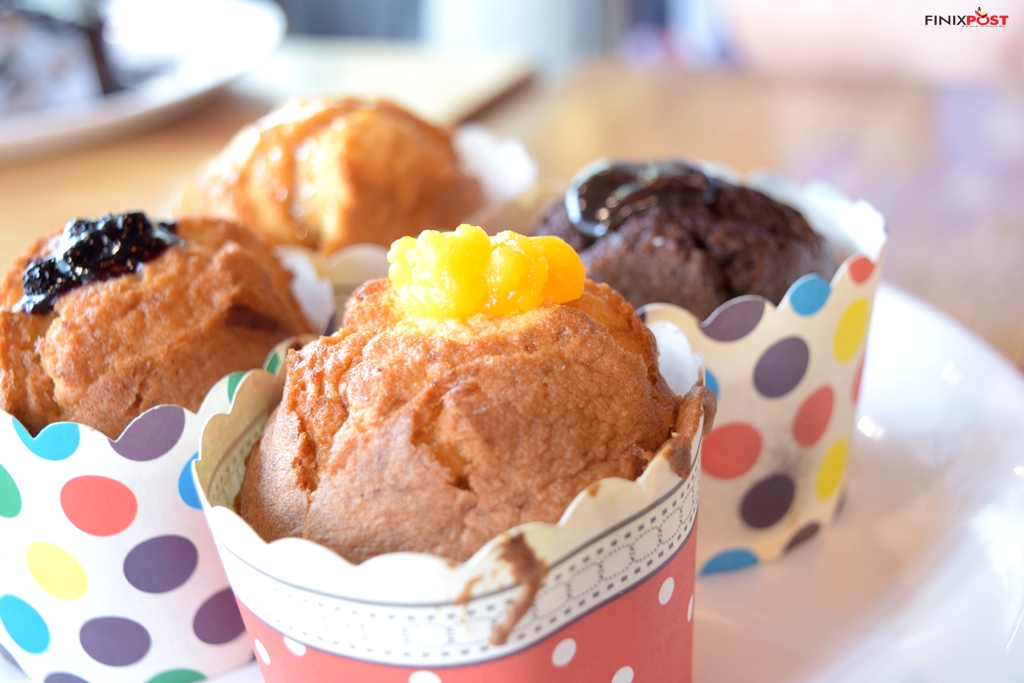 The muffins had four flavours – caramel, blueberry, chocolate and custard. The caramel muffins, with a mild caramel flavour, were very soft and just melted in the mouth. The blueberry chunks inside the blueberry muffins tasted too good. The filling inside the custard muffins was jelly-type and it’s not my favourite type of muffin. And last but not the least, the chocolate muffin was again appetising.

I also tried brownie which tasted so good with ice-cream. The chocolate shake that I tried had a really strong chocolate flavour which I loved. I also tried the mango smoothie. The reason why it impressed me was it was made from fresh mangoes and no preservatives were added to it. A health-friendly beverage it was! 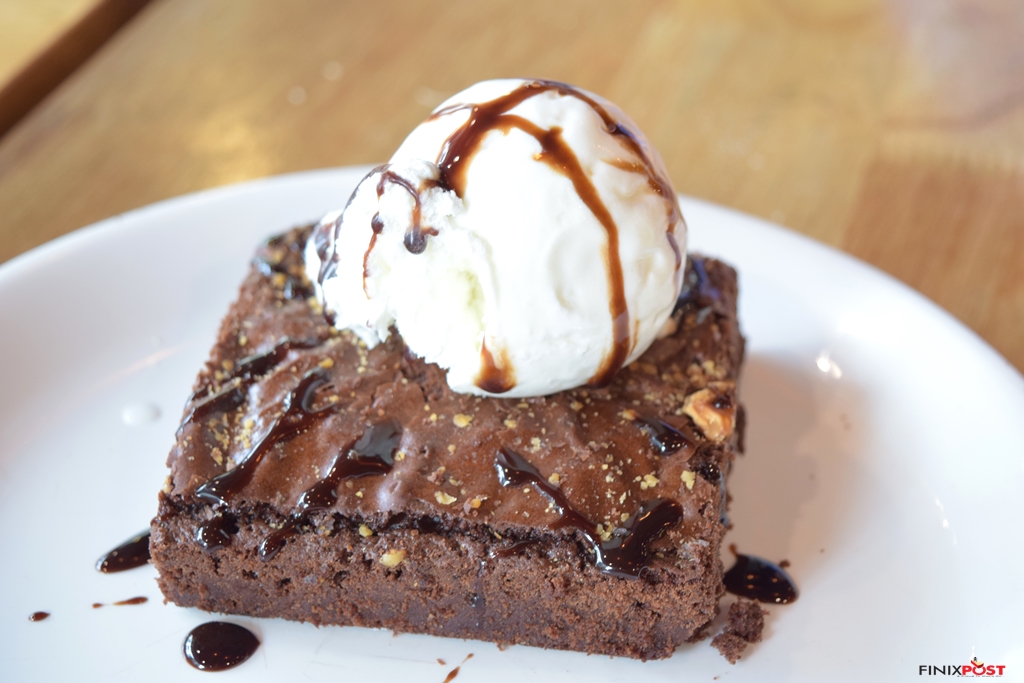 Overall, I totally love the food at this place. The whole ambience of the place is great and you can just sit and enjoy the fantastic food here while finding a value for every penny and minute you spend at this location. If you’re in Gurugram, check out this place. You won’t regret it. 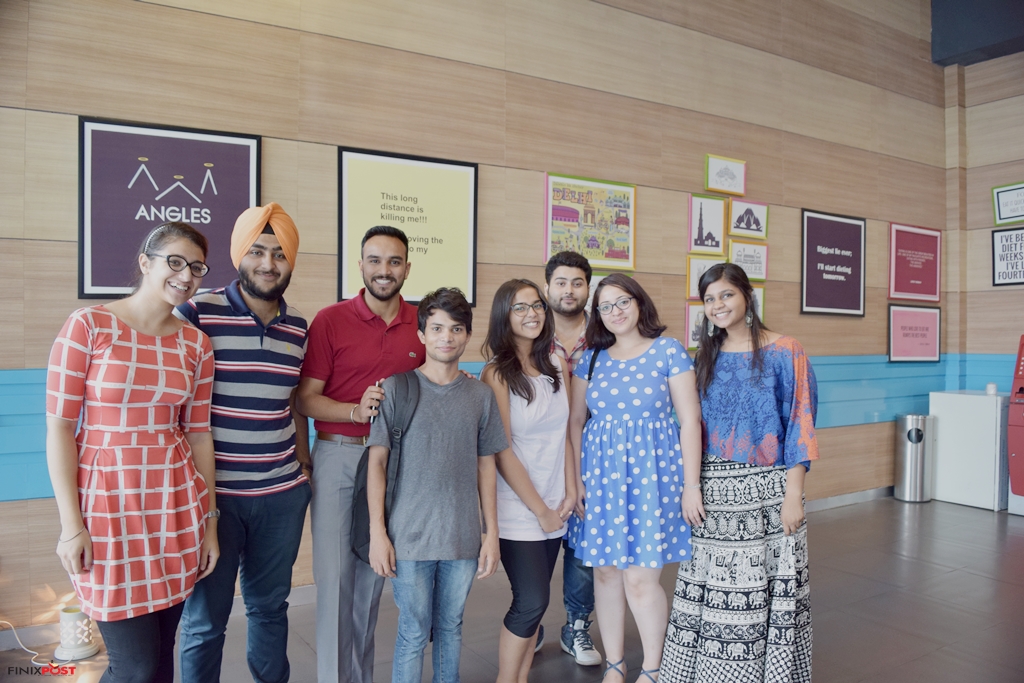