Do you like to drool over pictures of food? Is your wildest fantasy is based around food? I remember when I used to fantasize about a city where there was a river of kadhi and the banks covered with rice. There was a house filled with furniture and crockery made of chocolate. There was a building made of pizzas. And a lot more. 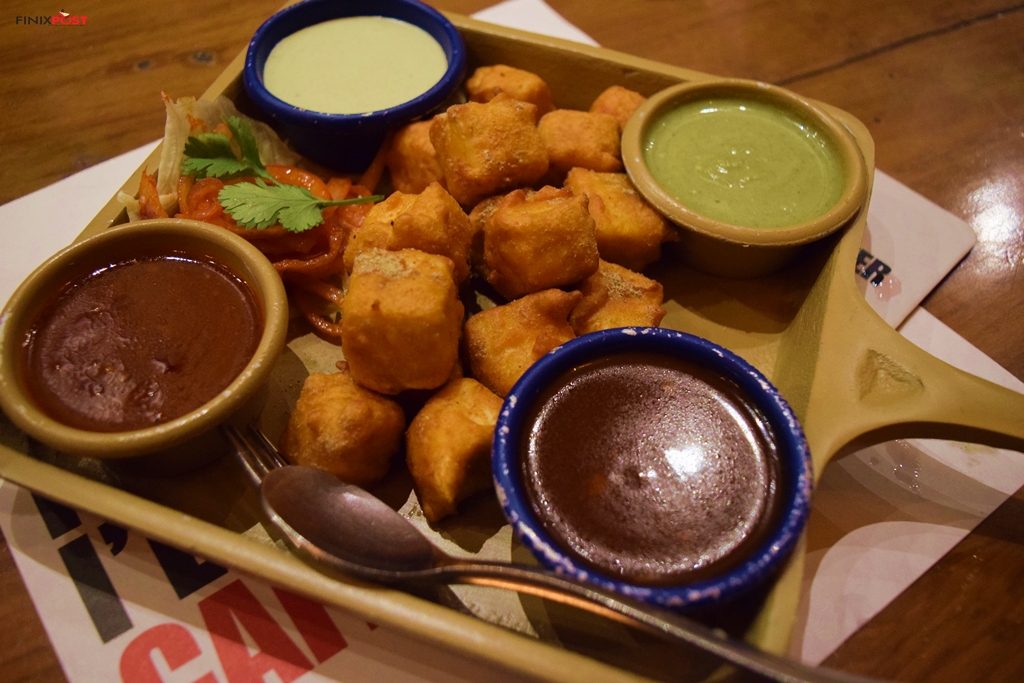 If your answer to the first two questions is a ‘yes’, this post can help. I am going to share some food photos I clicked when I attended an event hosted by a friend. Nah! I wasn’t there to do the usual – review or discuss blogging. It was just a small gathering where the food was on my friend (like not literally ;)). Basically, it was free food. So, how could I refuse? 😛

I was in a place with big fascinating buildings. Ever since I moved to Delhi, I have been missing that ‘wow’ factor of being in a big city. Nehru Place certainly satisfied my appetite. There are a lot of food joints just below the Nehru Place metro station and I happened to be in The Flying Sauce Cafe.

About the Mister Tikku event and The Flying Saucer Cafe

Mister Tikku is a blogger and a friend. What’s common in us is our love for food. The Flying Saucer Cafe hosted a contest where some bloggers were given a chance to curate a menu and serve for a day. And the best one of them would win. Mister Tikku was one of those bloggers who participated.

Obviously, he called some of his friends to just come and talk and check the menu he curated.

Let’s do the foodie talks

True to what he does, Mister Tikku added some twists to normal food items. People say ‘what’s in a name!’. Well, a name is everything. A name can make you thrilled and excited about a food item. A name can make you eat chicken even when you’re totally determined to turn a vegetarian. ‘A name’ is important.

The special menu that was being served was adorned with intriguing and cool names. It just made me want to try all of the stuff. So, not making you wait anymore for the food photos, let me show you what I tasted and what pictures I clicked.

It was vodka with a twist. Truthfully speaking, I was just served with this drink while I was completely unaware of what it was. I had three more ladies sitting beside me and the drink’s name is the last thing you care for when there are interesting topics being discussed by some fellow women bloggers.

While I have tasted a lot of drinks (Go! Tell my mom!), one thing I know is that I just hate that throat burning sensation about alcohol. I also don’t like to drink (I just taste) as one neat shot makes me talk endlessly for hours. I talk about how I should have become a hippie and do adventurous things, not love anyone and then ultimately become a writer like Paulo Coelho. Basically, I will bore you so much that you would want to kill yourself right then (or me).

But this Vodnar was pretty cool. From presentation to taste, it was all perfect. The base of the drink was Vodka and then it was mixed with pomegranate juice, lime juice and sprite. All four blended together into a brilliant flavor. I certainly want to try this drink again!

This is the dish which was praised the most. It was basically chicken tikka with obvious changes to the flavors. The juicy chicken combined with mild flavors was ecstatic. For me, either it should be a properly smoked chicken tikka or a super juicy and soft chicken tikka. This was the latter one.

The next dish I tried was this special paneer which delighted my palate more than I had expected. Initially, I thought it was just paneer with the typical gram flour coating. The twist seemed to be the four kinds of sauces served with the dish – mint, mint mayonnaise, hot garlic sauce and tamarind chutney. But there was certainly more to this than that.

Obviously, the dish was similar to paneer pakoras and that’s something a Punjabi has almost every week. With that, I can testify that this was the most unique and tasty paneer pakoras I have tasted till date.

This is rasmalai with a twist. When I asked my friend to edit these food photos (yes, I am horrible at editing so my bae helps me!), he was like… ‘they served you rasmalai with chocolate’ (in capitals). Of course, I didn’t reveal that I never actually tasted the dish but the impression I could see on his face symbolizes how epic the combination must be.

With all those innovative food restaurants coming up, it becomes really tough to be unique and different. It is easier to experiment with the decor, but experimenting with the food requires a real foodie with a creative streak. It was an amazing job and I would certainly want to taste this entire menu again (I can totally bet on the things I didn’t even taste).

Even though I had all of it for free, but my ‘miser’ (I wanted to say baniya  but then I don’t want to make this controversial 😛 ) side tells me the menu was great value for money. The quantity served for the mentioned price was good. It wasn’t obviously as much as I expect while ordering something in my Punjabi type Delhi (the place where I live), but it was more than enough according to what I have seen in usual Delhi restaurants, cafes and stuff.

With this ends my account of this food experience and the food photos. Let me know if any of these food photos made you drool!