Re-reading is awesome. Diving into the world you already know, meeting those characters again and going deeper into the meanings hidden in the words – that brings immense joy to the reader.

Giving up the race to finish as many books as possible in this lifetime, I started re-reading the books. The reason why I picked up the City of Bones Book which is the book 1 of Mortal Instruments series again was slightly different, however.

I have read the first few books in the series and then, lost touch. But I have always wanted to finish the series, which is why I picked it up again.

City of Bones by Cassandra Clare

The author of City of Bones has conjured up a fantasy world – the shadow hunter world. Shadowhunters – half humans, half angels. 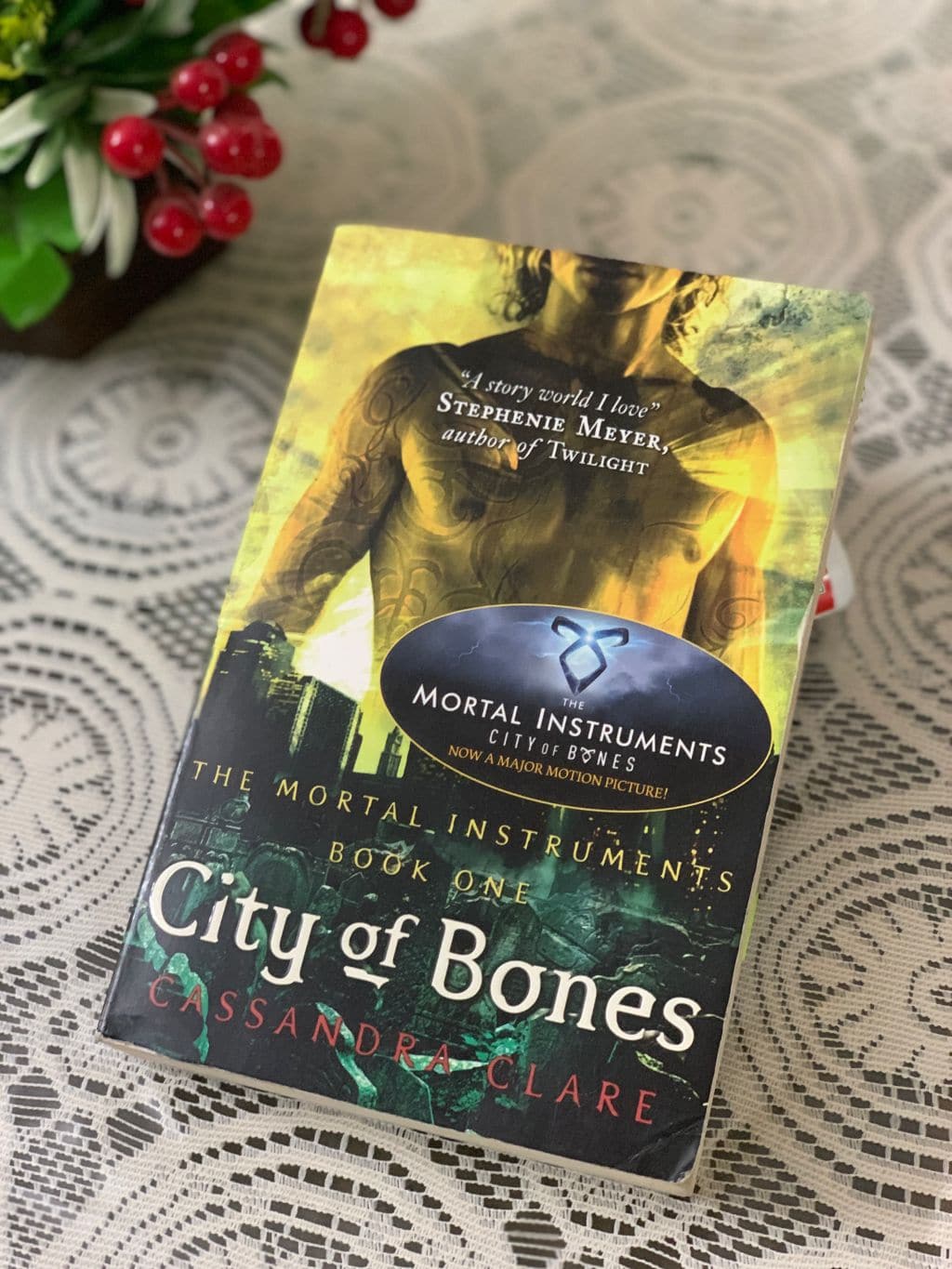 These are the people who protect normal humans like you and me, the mundanes, from vicious downworlders – vampires, werewolves, warlocks, and fairies. They fight with dangerous demons and keep the downworlders on a tight leash.

Clary Fray is just another mundane from our crowd, until one day, she visits a club and sees a shadowhunter – Jace.

With fireworks between them, Clary begins to find out that maybe this is where she belongs to – the shadow hunter world. Things escalate as her mother goes missing and Clary is desperately trying to understand what’s happening.

The book begins slowly and sadly, I can’t say you would find it racing at any point. It’s just an okay book. You don’t read this book to enjoy it, honestly. 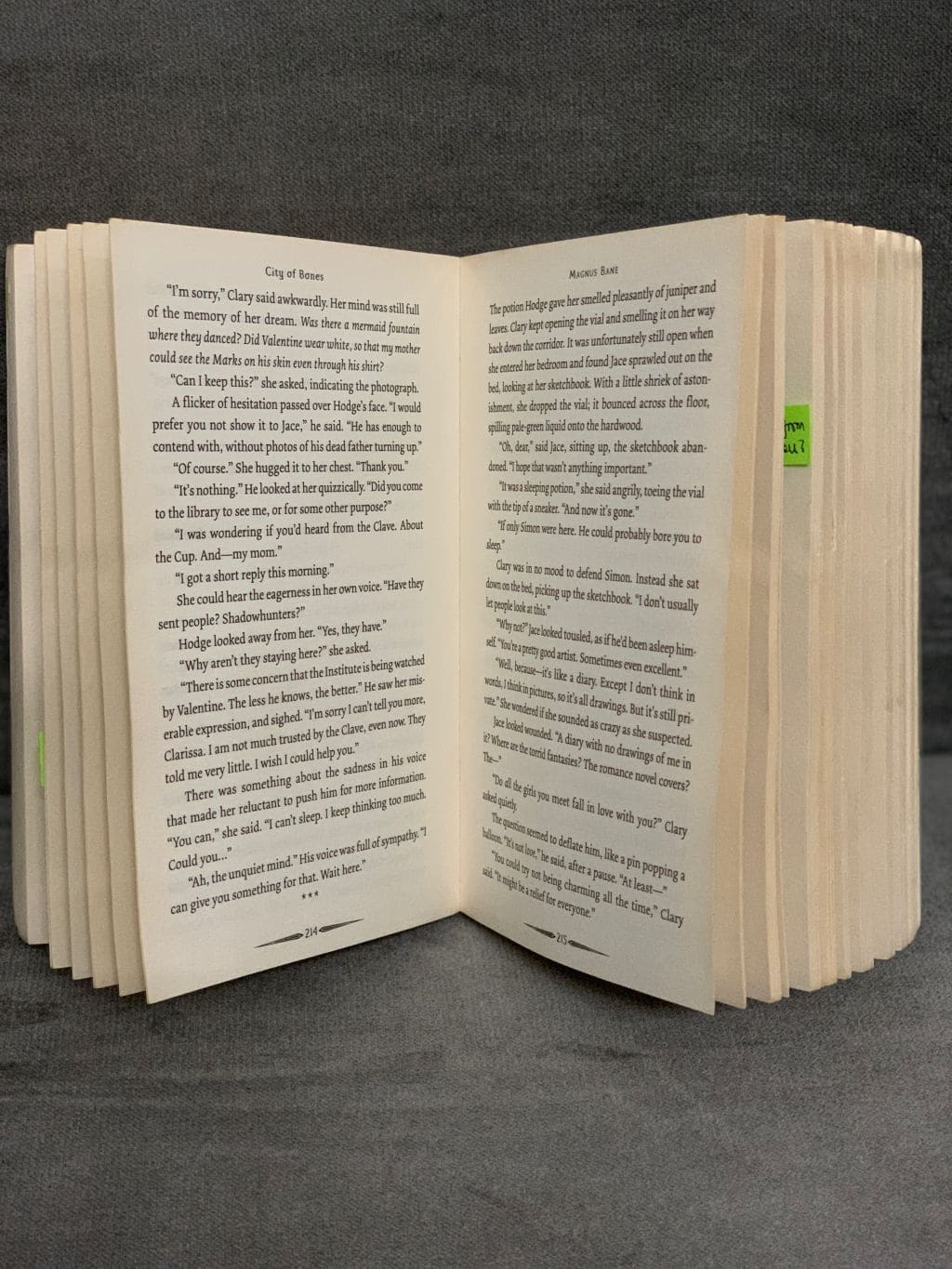 You read a fantasy book like City of Bones to know the characters, connect with them a bit and move on to the second book and so on… as the Mortal Instruments series keeps getting better as you continue reading.

You begin to connect with the characters, though you’ll always frown at Clary. In this book, at least, she’s the typical clueless teenage girl who’s following others… who doesn’t show the strength in her character, or even weaknesses, so much to make you fall in love with her?

However, other characters – Alec with his secret vulnerabilities, Isabelle with her badass looks & skills, and Jace hiding his true self… you will begin to care more and more about these people.

Simon, the best friend who stays attached to Clary like a parasite and Hodge, the tutor whom the shadow hunter kids love and then, Magnus Bane – a character you will find intriguing in this book but you will adore as you keep going on with the books.

And then, there’s the amazing complex plot of the book. Re-reading the book made it even better as I could see the little clues the author throws here and there. It’s even better in the next book, City of Ashes but fairly good in this.

Do read my other book reviews here.

It’s simple and yet, complex. Impressive. The things the author has woven in this story… the blows were a little fading for I already knew what happens but if you haven’t read the book ever, you’re in for surprises. Plenty of pleasant and shocking surprises.

The author has a smooth writing style. Easy to read and comprehend. However, I did pace slowly through this book. It gets so much better – the whole writing the smoothness of the Cassy Clare words gets SO much better in the next book.

Yes, I am super excited about the next book than this book 1 – City of bones itself. But keep in mind that you CANNOT skip this one. This book builds everything you’re going to enjoy in the next books. So, pick it up, go through it and then keep reading the shadow hunter novels.

(may contain some spoilers)

Clary Fray, a normal teenager goes to a club with her childhood best friend, only to discover a world her mother never wanted her to find out.

Things escalate as her mother goes missing and she tries to settle herself around this new world that she just found.

As she tries hard to believe in the demons, vampires, fairies, shadowhunters and all the stories that are actually true, she discovers about this evil shadowhunter who wants the Mortal Cup – an instrument that can be used to create more shadowhunters, but may also kill several innocent people.

But Clary can still not see it clearly and to fix that, she visits the city of bones and then, goes to Magnus Bane. Soon, her best friend turns into a rat and Clary & Jace, with sparks flying towards each other, find themselves in the vampires’ lair.

They barely escape from there when Clary finds a clue her mother left for her, only for her. Clary knows where the Mortal Cup is and they go to retrieve it. There happens a huge fight between the Shadowhunter kids and a greater demon.

Alec is injured and the shadow hunters are back into their home, a glamoured church, to be betrayed by their dear tutor – Hodge. Hodge trades the cup with the evil Valentine to get a curse lifted off him. Valentine takes Jace too.

Clary, full of hatred and vengeance follows Hodge, and discovers her father-like figure, Luke, hadn’t abandoned him at all. He was actually looking out for her. With Luke and his werewolf pack, Clary tries to locate her mother again and this time the final showdown happens.

Clary finds her mother but also finds a truth that shatters her – truth about her father, about her brother… a truth she never wanted to find out.

Read the review of the next book:  City of Ashes here.