Sometimes we face the toughest moments in our life. We’re feeling hungry, but we’re not hungry. It’s a big problem with foodies. We often feel hungry but aren’t in real. When I face such a situation, I look for a light lunch in a relaxed cozy cafe. Luckily, this time, when I faced such conflicting emotions, I had planned to visit Cafe Jerry House. 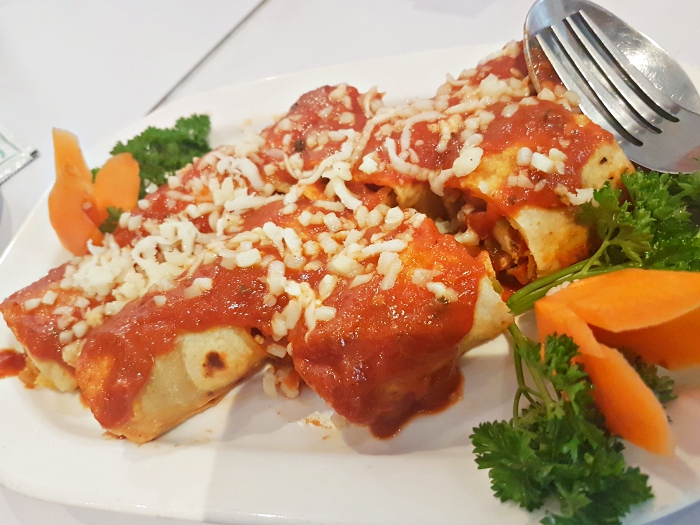 It’s a relatively new place situated in Geetanjali, New Delhi (nearest metro station – Malviya Nagar). It’s a small place with indoor and outdoor seating. I chose to sit inside as it was too hot outside. And then began my food journey at Cafe Jerry House.

Both the chicken and veg fillings were good. Though I liked the veg filling more as it had more veggies, which added some variety to its taste. Roll was a little tough to chew, maybe it got cold because I was busy taking pictures but that was a bit turn-off.

The chicken fingers were perfectly cooked, moist and soft from inside and crunchy from outside. The coating was really yummy and though they were fried, they didn’t feel that oily. The dip that was served with the fingers actually stole the show. I’d suggest to definitely try this dish if you visit the restaurant, if not for the fingers, then for the dip. It was a wrong decision to order them. Plating was not good and the nachos were a bit stale. I’d just say they looked better than they tasted.

Honestly, I didn’t like the plating of lasagne that much. The pasta sheets were cooked well and layering was good. The chicken filling was cooked well in tomato sauce. I missed the cheese between the layers, though. All in all, a good dish if you haven’t tried lasagne before.

Though it looked good, but I can’t say the same about the taste. The potatoes were really crispy, like, too crispy, but the excess use of soy sauce ruined the dish. It had become literally bitter in taste. I couldn’t taste the chilli or any other flavor because of the strong soy flavor. If you order the dish, please ask the chef to use less sauce in advance.

This was something new for me as I tried the hoisin sauce for the first time, and I must say, I was not disappointed. The chicken was crispy from outside and really soft and juicy on the inside. The hoisin sauce gave the dish a strong flavor, while still keeping the flavor of chicken intact.

Special? Yes it was. Never saw anything like this before. 3 slices of bread topped on each other with tangy potato filling and tomato – cucumber laid in different layers, topped with mint chutney and aloo bhujia. The moment I took one sandwich piece (very carefully) and took a bite, all the bhujia fell down. Fortunately, the taste wasn’t that bad, it was actually good. So, if you don’t have clumsy hands or don’t mind to eat the bhujia with a spoon from your plate, you can definitely try this dish. It would give a “bumbaiya” feeling.

Sizzler with noodles and chicken in hot garlic sauce

Sizzler was really delicious. Tasty noodles, soft and well-cooked chicken pieces with some veggies in yummy hot garlic sauce. Among all the Chinese food that i tried, this was undoubtedly the best dish.

It was a well-cooked dish. The chicken breast was roasted beautifully with some chicken fillings. the mushroom sauce was rich in taste and creamy in texture. it really complimented the roasted chicken which would melt in your mouth. A must try dish.

Again a good dish. The chicken was perfectly roasted but had no fillings. The barbecue sauce was really good and complemented the chicken flavor really well. another dish which you should consider trying. It was a great refreshing drink. watermelon flavor was perfect with a little minty touch. a perfect beverage to start your meal. If you are a chocolate or oreo fan, this is a must try. really yummy, really chocolaty with crushed oreo and coffee flavor was just perfectly blended in.

Overall, Cafe Jerry House has some brilliant dishes and then some average dishes. I liked the simplicity of the dishes and would definitely like to try my favorites once again at this place.