What’s the worst thing that could happen when you finish college? Not getting a job? Becoming an addict? Drowning in a huge debt? Oh no! In India, the worst thing that can happen to you after you finish college is ‘marriage’. A huge number of people show up at your house every week claiming to be your relatives. Then they interview you like Barkha Datt inquiring about every single aspect of your life. And then it begins… the chase to find an eligible spouse. 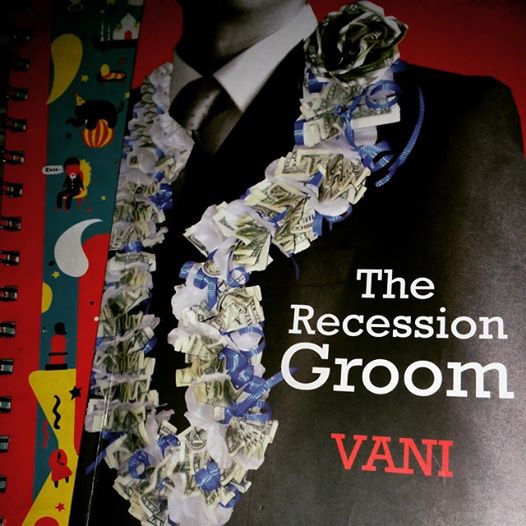 At such a time, all you can do is to look for options that would help you to find demerits of getting married. A book that talks of a subject similar to that is too alluring to resist. The Recession Groom happened to be one such book I came across at such a time.

What’s in The Recession Groom

While the story seems quite predictable from the title, I would still want to tell you what it is about. Trust me; never judge the book by its title. The titles are meant to catch your attention. They can misguide sometimes. Talking of The Recession Groom, the book is the story of Parshuraman Joshi who is a handsome Hindu Brahmin working as an IT professional in Canada.

Parshuraman is 27 and his family is looking for a suitable bride for him. And as we know it, a guy settled in Canada working as an IT professional, only the phrase is enough to get loads of matrimonial proposals. The book is how even after working so hard on his job; Parshuraman falls prey to recession and loses his job. This obviously affects his eligibility status as a groom.

Along with finding a new job, Parshuraman has to find his perfect partner. The Recession Groom is the story of how things changed for this guy due to recession and what happened in his life after that.

About The Author of The Recession Groom

The book is the first attempt into writing by a former journalist Vani. Vani belongs to Chandigarh and has herself faced the dreadful time of recession. This might have inspired her to write the book. To read more about her, check her Goodreads profile.

Review of The Recession Groom

The story of the book begins with Parshuraman working on a project named ‘Project Infinite’. There’s nothing enjoyable that happens in the beginning. Parshuraman is portrayed as a sincere guy who could do nothing in his college life but study. No girlfriend. Of course, this would make many IT guys sympathize to him. Then enters his colleague Jennifer who is called a ‘fireball’ in the book. Jennifer is a modern woman who seems to have a thing for our hero of the story.

Just after a few pages, you would get to meet Parshuraman’s family. His sister Ragini and maternal grandmother. Ragini is the elder sister of Parshuraman and is competing with his Aunt Parvati to find a good match for him. The family seems quite fond of Hollywood movies. Ragini and Parvati keep citing names of Hollywood actors in almost all of their conversations while Parshuraman’s uncle is an avid reader.

Parshuraman and Jennifer find themselves in petty arguments which were not enjoyable.  There are some more colleagues who find mention in the story but they haven’t been paid much attention to. It was even difficult to connect with Jennifer. The whole attention was paid to Parshuraman and his family. That was a big miss for other characters could have added much entertainment to the story, especially Jennifer.

Parshuraman also visits India for a while which was again not so gratifying.  Some incidents had no relevance in the whole picture. For example, the scuffle at the railway station seemed like a useless incident to me. It had nothing to do with the entire story. Nor did it manage to add some kind of entertainment. It was failed attempt of adding some “Bollywood Masala” to the book.  There was another incident where Jennifer gets scared by a lizard. The incident could have been a dramatic scene which would have made our hearts skip a beat. But the author just missed that.

The conversations of Parshuraman with his family are fun to read. They help you catch the right emotion. You laugh at the funny things that happen, you get disgusted at the way Indian Aunts are, you get excited for what’s next. At this point, I must say that you don’t get bored while reading the book. It is not a page turner but somehow it manages to keep hold of your attention.

But there are a number of loose ends in the story. Parshuraman’s neighbour in India find hardly any mention after his first visit to India. Parshuraman was set up with a South Indian family. There’s no mention of what happened to them when Parshuraman’s aunt set him up with a girl named Tara. There is a serious aspect of Tara’s life which is completely ignored in the story. When Parshuraman is asked to report at his office with details of all the projects he had worked on, he specially goes for one file. Why was it important? All such questions would remain unanswered forever.

There are some miserable jokes in the book. Looks like author has to work on her sense of humour. Also, in the entire book, author addresses people like Parvati as Aunt Parvati. Come on! It is Parshuraman’s aunt. How come she becomes a “universal” aunt (even author called her aunt at places)? It was confusing how the author addressed people. Parvati calls her mother ‘Nani’. I don’t remember which Punjabi family does that. It wouldn’t be wrong if I say that I had to re-read a couple of sentences to see who was talking to whom.

Some scenes are not properly worked on. For example, when Tara’s father comes to meet Parshuraman, he just comes out of the car and announces his name in the air. Who does that?

After almost 100 pages, author thought of making the book appealing to the audience all around the world and so she made the characters ultra modern (just like they are thought to be in western countries). Parshuraman, who hasn’t had any girlfriend till date, kisses Tara even when he barely knew her. He wouldn’t even have exchanged 50 sentences with the girl and they kiss just like that.

It seemed the author forgot to be clear with a number of things in the story. The way Parshuraman arrives at his marriage day left me with lot of questions. Come on! In a Punjabi tradition, it is a function of almost a week. Even if your family is too modern, the groom would be required to be at the venue at least a day before. Here our hero moves from Toronto to San Jose only on the day he is getting married. If he is late, why? Another loose end.

There are some really good lessons author has conveyed through words of different characters in the story. They actually make you feel good. Of course, there are a number of loose ends and missed things in the book, but that doesn’t make it a bad one. It could have been a lot better.

The book is a onetime read and not everyone would find it good. The people who read thrillers and likewise genres should never touch the book unless you want to feel disgusted after reading it. The people who just like to read light hearted stories would find this good.

If you want to buy this book, VISIT THIS LINK

This book review is a part of The Readers Cosmos Book Review Program. To get free books log on to thereaderscosmos.blogspot.com