A cat is murdered and a young school boy Pratap Pande has worn his detective hat to become the next Sherlock or Poirot. Mr.  Heathcote, the beloved cat of the school, is found dead one day and no one but Pratap aka Pojo smells foul play. And so he starts the investigation and then some of the most unexpected things are revealed. 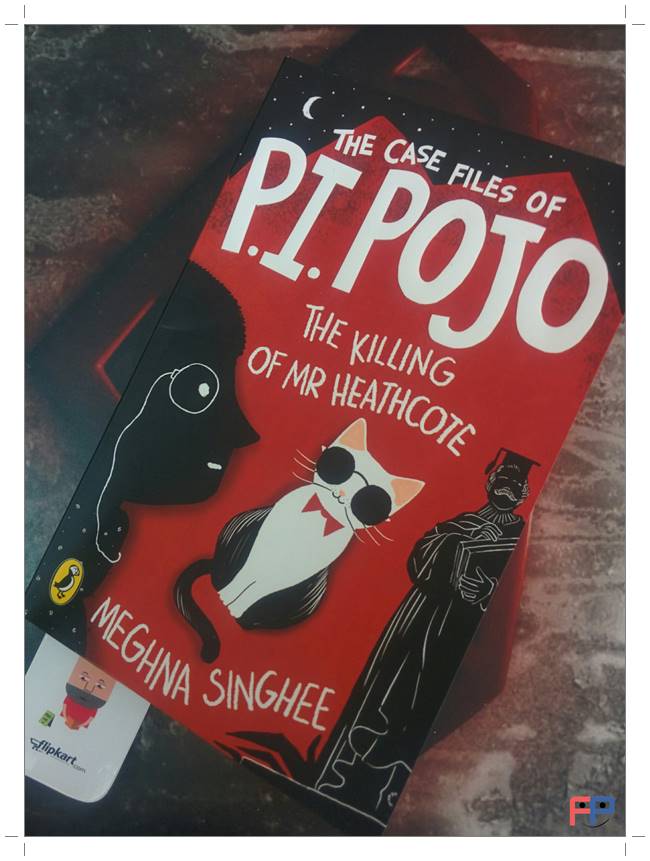 The book, The case Files of P.I. Pojo – The Killing of Mr Heathcote ,is fun to read and interesting. Interesting? How can I say the word just like that? So, let me explain. Let’s begin from the cover page the book.

The cover page of the book has been designed such that no one can take all of it in one go. After all, the book talks about a mystery and the cover page has been carefully designed while keeping that in mind. Of course, there is no mystery or riddle hidden in the cover page (which would have been even more interesting), but you would like looking at the cover page for a while. In the beginning, I found the book a little kiddish (which is quite obvious for the book is for age 10+) but you have the word from a 20 something that this feeling would be gone in just a few pages.

The book, The Killing of Mr Heathcote, starts with the death of the cat. What? Cat. Yeah! That was funny. I kinda found it weird to read a book that talked about the murder of a cat. Not that I hate cats or something like that but it was as if I was reading a children’s mystery book. And that’s the interesting part. What’s so special about the cat? And what about the murder/death?

Then Pojo starts investigating the case and the way the writer has put on the details of everything Pojo does, every investigation, every situation, every setup is so good. It is so easy to visualize everything and when you can do that, you find yourself standing in an interesting place and solving the mystery along with P.I. Pojo.

The book also talks of small petty cases which Pojo had to solve sometimes. Those short 1 or two line paragraphs were really fun to read and would certainly make you laugh.

The main character of the book is Pratap Pande who is known by the name P.I. Pojo in the Heathcote School which is a boarding school in Panchgani. Pojo obviously gets all the attention in the show and it was such a good experience to see the book through Pojo’s lens.

Then there are Pops and Radha Rao who are cousins and end up being Pojo’s sidekicks in this case. Pops is another character I loved from the book. Oh! There was one more character which stole the show in the book (if that’s correct English 😛 ) – Mr. Heathcote. In the beginning, you would feel like it is just the cat but by the end of the book, you would fall in love with the cat and understand its importance.

Review of The Killing of Mr Heathcote by Meghna Singhee

Yeah! I know you read half of the review in first part but there is more. I bet you won’t be able to solve the mystery just like that. The more you read the book, the more it intrigues you. You get confused and restless for who the murdered could be. The moment you decide that ‘this’ person could be the murderer, you are proved wrong and that makes it so interesting.

It would be an understatement to say that you are kept glued to the book till the end. You just can’t stop thinking about the book and trying to solve the mystery and I bet it is tough to solve it, really tough.

One more thing I liked about the book is that it never felt like author was trying to push to add some twists in the story. Everything was so natural and I loved it. This mystery is definitely better than any mystery movie that you have seen in bollywood. This Indian brain worked very differently and I so loved it.

There were two three points which I didn’t like about the book and you know what I don’t even remember them now. Because I couldn’t get my hands off the book to take notes. Lucky author! 😛

Final Verdict of The Killing Of Mr Heathcote by Meghna Singhee

I thoroughly enjoyed the book, The Killing of Mr Heathcote. This mystery novel does its job perfectly. I so want to read more mystery novels now. If you like mystery novels, this is your cup of tea. Grab the book and read it now. You would love it… LOVE it.

Note: The book was sent to me for the review. No monetary exchanges were done because money makes reviews untruthful. No?