“Somewhere, behind closed doors, in her solitary world;

Somewhere, under the sheets with an indifferent lover;

Somewhere is a woman who will not be denied…”

Stories are not just stories. There are some chronicles which are narrated for a bigger reason. Those recitals are not just meant to make you listen to an account of a person’s life.

They are told for someone wants you to understand the message, the message which is presented to you wrapped inside the story of a person’s life.

But how are we supposed to understand that hidden meaning? That too through a book which have no expressions but words. That too from words which aren’t supposed to reveal the message just like that! 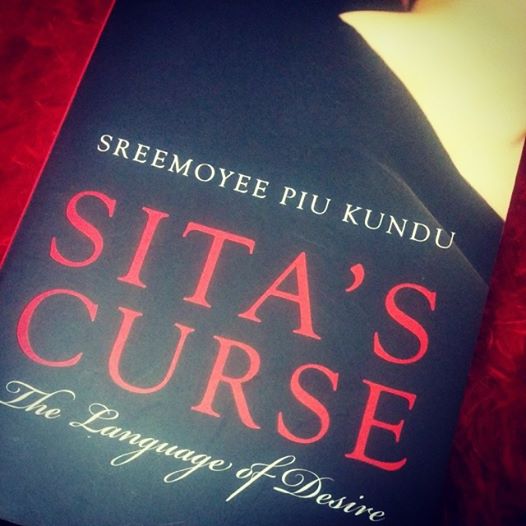 It is really difficult to make the readers understand the book like the author understands it himself. And it all depends upon how good the author is. If he’s really good, he can make you feel exactly how he wants and if he’s not.. Then you would just end up reading the story of someone else’s life..

Sitas curse (Sita’s Curse) is the second book written by Sreemoyee Piu Kundu which presents the story of Mrs. Meera Patel who is locked inside a dead marriage and soulless life as a homemaker until one day she decides to break free..

According to the author, the Sitas Curse looks at the hypocrisy of Indian society and tell the compelling story of a middle-class Indian housewife’s urgent need for love, respect, acceptance – and physical fulfillment.

But does the book really serve the purpose of providing a view point of hypocrisy in Indian Society which is well known to all the Indians? Is the account of life of Mrs. Meera Patel really compelling? Can you really feel the pain which a woman stuck in a ‘dead marriage’ does? Can you really relate yourself to the book?

Here’s what I feel about the Sitas curse..

Sreemoyee Piu Kundu is a Delhi based full time novelist. Sita’s curse is the second book with the next two releases already on the cards. She has also been planning for her fifth novel.

Let’s start from the former one – what it was like to read the account of Meera’s life.

Truthfully speaking, there wasn’t much in the story. Though there is an account of her entire life ( from her birth till the day she decided to leave after fifteen years of her marriage) in this one book but still, there weren’t many things that actually happened, except the fantasies of Meera Patel or some steamy moments with a number of guys.

It wasn’t really clear what author wanted to portray through life of Meera? Did she want to tell how Indian women had to live in this hypocrite society where they’re worshipped and disgusted at the same time? Or did she just want to take Meera’s side and rationalize all her deeds with the fact that she wasn’t given what she deserved in her marriage? Or did she just want to be unbiased towards all the characters and tell what really happened?

I can think of many possibilities of what author wanted to say but the truth is I didn’t really get what the story was all about. It was just Meera and things happening in her life in a haphazard manner.

I can say a lot about the story but in a nutshell, I would call that the story seemed ‘dead’ like Meera’s dead marriage. There was nothing which can attract a reader towards this book except the extra detailed accounts of Meera making out with one person or another.

Though the author did a daring job to write  books of such genre, but the only good thing about the book is that author dared to write it. That’s it.

There is nothing in the book worth reading. There is nothing which would compel you to think what happened with Meera and relate it to the way Indian Society is towards women. Yes, a few moments did try to make me think but their try was in vain. Moreover out 332 pages, there were hardly 2-3 pages which made me feel like I was reading a good book. Is that enough?

Yes, this time I can certainly go on and on with how bad this book is and how useless the story is. Yep, I felt like my time was wasted reading a book which went in no direction.

It’s bad to disrespect a book  and say it’s a bad book but didn’t the author disrespect the feelings of reader’s while creating a piece like this? And didn’t Hachette think before letting this book get published? Or may be Hachette India thought that this book would sell for movies like Ragini MMS 2 also become hit (at least the movie did what it was intended to do)?

My verdict for the book: In plain and simple english, don’t read this book. Neither it is a good novel as far as its genre is concerned nor it is a book with a deep message combined with a heart touching story. This book gives you nothing, but disrespect for authors like these. Sitas Curse is a tribute to an unknown lady inspired the author to write this book. According to me, it’s a disaster!

“This book review is a part of The Readers Cosmos Book Review Program. To get free books log on to thereaderscosmos.blogspot.com“