The Viral Fever is an online platform for entertainment founded by Arunabh Kumar who has gone lengths to create an impact and have a great audience for the same, and his efforts are actually transcending borders with some excellent web series by TVF getting popular with the masses.

Arunabh Kumar along with Biswapati sarkar, Amit Golani, Nidhi Bisht, Bundhoo Bundhoo, Anandeshwar Dwivedi and Deepak Mishra started everything from the scratch and they have done great jobs. From script writing to casting, efforts are commendable. Great music has played a major role in all of these series.

All this comes as a breath of fresh air away from the clichéd melodramatic daily soaps.

This web series by TVF is about a young couple Tanya(Nidhi Singh) and Mikesh(Sumeet Vyas), who were in a long distance relationship for 3 years.

As Mikesh comes back to india and proposes Tanya for marriage, the emotional journey begins. While they get occupied in planning their future, life starts giving them surprises.

Another major role in the show is of Purushottam(Deepak Kumar Mishra) who is a broker as well as a driver.

One will surely notice the maturity in two lead actors while going from season1 to season 2. The story has been executed very well as it has all the ingredients like drama, romance as well as joy to cook a perfect story. This series unfolds a story about 3 siblings who go on an unplanned road trip and hence Tripling!!! In a conveniently dysfunctional family, Amol Parashar plays the role of Chitvan who is a carefree and chilled younger brother, Sumeet Vyas plays the role of Chandan which is in absolute affinity with Eldest brother while Manvi Gagroo plays Chanchal and she really does justice to her role of a sister as well as her Rajasthani looks.

Even Kunal roy Kapoor as Pranav has done a good job. The storyline provides a lot of oppurtunities to build an emotional track with an equal mix of humour and sarcasm.

This unforgettable, unplanned roadtrip is sheer delight for viewers . The locations shown here are picturesque but the music requires a special mention as it is the x-factor of the show. 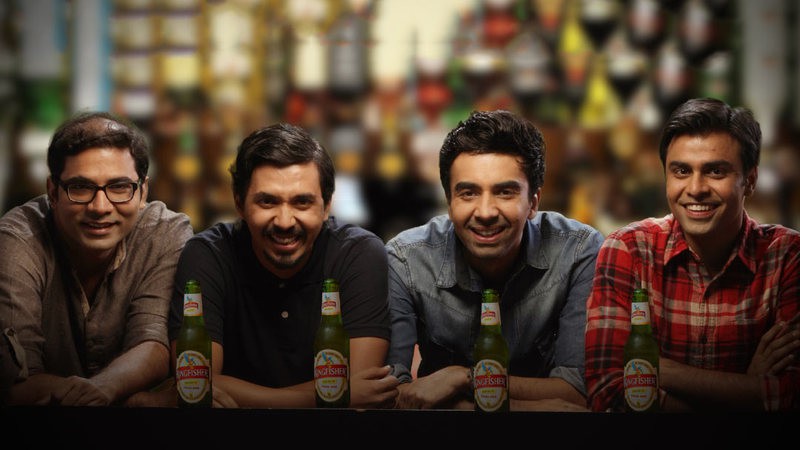 This story is very realistic. This web series by TVF depicts the life of youth in big cities in India. It showcases the real life scenarios faced by 4 guys  who are struggling to to fulfil their mission of owning a StartUp as well as self growth.

Naveen Kasturia fits very nicely in his role as Bansal who is a capable leader and a genuine friend.  Though Yogendra Pandey as yogi is a hothead, but still comes with many bright ideas a lot of times with his college-boy attitude.

Jitendra Maheshwari plays the role of Jitu whose life is full of unresolved issues with his father as well as life but has an evident story of self growth. His wife Saumya plays an integral part of the show. Sourav mandal(Abhay Mahajan) is an outsider in the group and is always at odds with others.

His eccentric behaviour and interests bring a humour to everything. This show has a very high IMdb ratings. This is an online talk show where none other than Biswapati Sarkar himself plays the role of Arnub based on the famous Indian journalist Arnab Goswami.

It is described as country’s first talk show featuring a host with bad attitude  Arnub here tries to be funny and boisterous. More like the real Arnab, Arnub doesn’t let anyone else speak much. This web series by TVF showcases chemistry between a father, Gajraj Bhatia and a son; Jeetu played by actors Gajraj rao and Jitendra Kumar respectively. It depicts the hard time you have had explaining technology to your father. Packed with rib tickling as well as frustrating questions, these conversations are truly dreadful.

On the surface, there is only one question though answering a query gives birth to a whole army of them. At some point, this situation makes you pull yank your hair out and this has been brilliantly showcased in this web series.

Now what are you waiting for? Go! Start watching TVF play and do let us know about your experience as an audience!!!